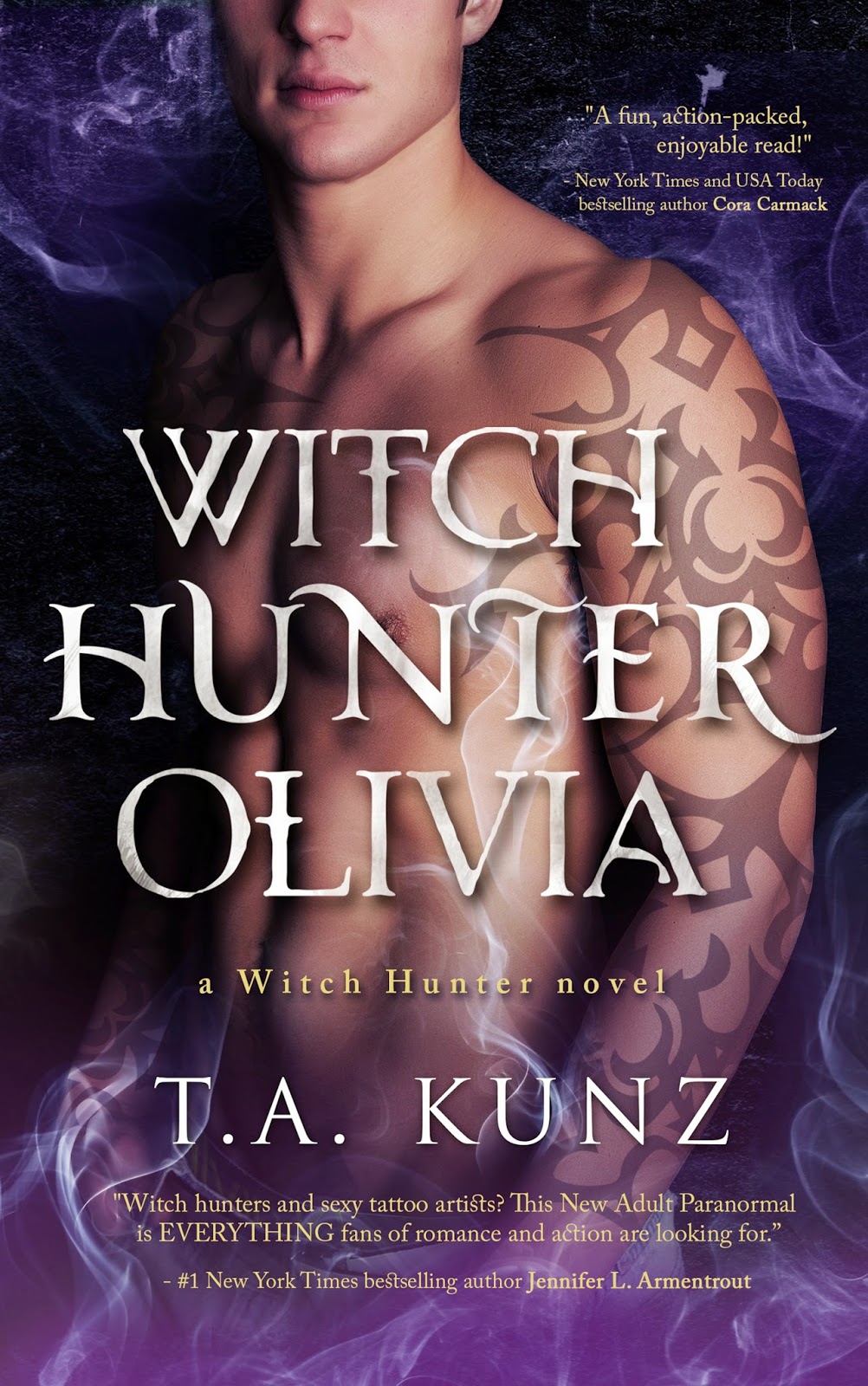 Blurb:
In the town of Piedmont Pointe, where paranormal is the norm, a girl can easily get herself in over her head with a single wrong move. Unfortunately for Olivia Adams, she’s about to make several.

Starting over is never easy, but it seemed like the only option to Olivia. The decision to turn her back on the Guild of Witch Hunters, the very group she devoted her entire life to, was one of the hardest things she ever did. It meant leaving her family, her friends, and her old identity behind forever. Coming to terms with what caused her to abandon her duties in the first place was even harder.

While trying to lay low and stay off the Guild’s radar, Olivia finds herself thrust back into her old ways after unknowingly interrupting an assassination hit on a powerful witch. What follows is the last thing she ever thought she’d agree to do—protect the very thing she was groomed to hunt.

To complicate things even further, Olivia begins to develop feelings for a tattoo artist who also happens to be half warlock, and no matter how hard she tries to fight it, she can’t resist her inescapable draw to him. Olivia’s forbidden relationship isn’t her only issue though, because once the mystery behind the assassination attempt starts to unravel, she’s forced to choose sides when the loyalties still tied to her past life are tested again.

So much for the idea of a fresh start.

I turn on my side and watch Heath stroll to the bathroom door. He enters and slides it closed, but it gets stuck with about a half a foot left to go. He fights with it, but it doesn’t budge past that point.

He chuckles. “Damn thing. Been meaning to get it fixed,” he says. “All right, no peeking.”
I smile before turning over to face the other way. I find myself staring into the large mirror attached to his dresser that looks directly into the bathroom. It’s a small bathroom that’s streamlined straight back leading to the shower, so there’s no way he can move out of view from the opening in the door.

Heath inches up his shirt, revealing his tight, firm abs. His pants are resting low on his hips, showcasing the highly toned and defined groin area peeking out over the top of the waistband. Blush starts working its way up my cheeks when I realize I’m watching Heath like some kind of voyeur.

With his shirt off, it’s hard not to admire the tattoos that wrap from the top of his hips all the way up his side and then across his chest before cascading down his arm in a fluid motion. Warmth begins coursing through my body at the thought of my hands tracing the edges of his beautiful artwork. I shake out of it when I notice he’s unbuttoning his pants. He clearly has no issue with his body since he so freely strips off his clothes without hesitation.

I avert my eyes when he begins to slide off his underwear. When I hear the glass shower door slide open, I glance up when my curiosity gets the best of me, and see his highly defined and gorgeous body reflected in the mirror. The deep black tattoos spread across his back as well, and only add to the fact his entire body looks like a piece of art standing there. Once he disappears behind the door, I can relax somewhat, but dangerous thoughts begin to pound at my brain and a yearning develops between my legs.

“This was so not a good idea,” I whisper to myself, trying to keep my feelings at bay, but failing miserably.

The glass shower door is opaque, but I can still see the contours of his body through it. Even his outline is a work of perfection. My heart begins to beat faster in my chest the longer I stare at him. The throbbing between my legs starts to overtake my whole being, and I feel myself compelled toward the open bathroom door. I fight it back and flip onto my back to be face up on the bed so I can’t stare into the bathroom anymore.

Studying the minor cracks in the ceiling to distract myself, I try not to focus on my current obsession. The bed begins to feel like it’s on fire as heat assaults my backside in waves. This must be the exact place Heath sleeps. I can feel his residual energy while resting against his pillow and sheets. The light scent of his cologne clings to the fabric and is now swirling around me after I disturbed the bed by moving about.

I spring up in a sitting position when I can’t take the feeling anymore. The shower’s still running, and I can hear the sound of the water being redirected as it hits against Heath’s body, causing an irregularity in the sound. I’m so worked up right now, I have no idea what to do.

Witch Hunter is an action packed read that has something for everyone. Suspense, magic, paranormal and thrills are plentiful in this novel. From the start, you are taken to a sorority party full of witches. You encounter a colorful cast of characters and the story line is never dull or predictable. T.A. did an amazing job on Witch Hunter and I am looking forward to reading more by this talented author.

T.A. Kunz has always had a fondness for reading thrilling mysteries and action-packed urban fantasies. So, it was no surprise when T.A. decided to write stories that they’d fall into one of those two genres. T.A. lives in Central Florida with two fur babies and a mechanical engineer who also happens to be quite the culinary badass, which there are no complaints about. Being a self-diagnosed caffeine addict, many joke that T.A.’s addiction to Starbucks coffee will likely be their downfall later in life. 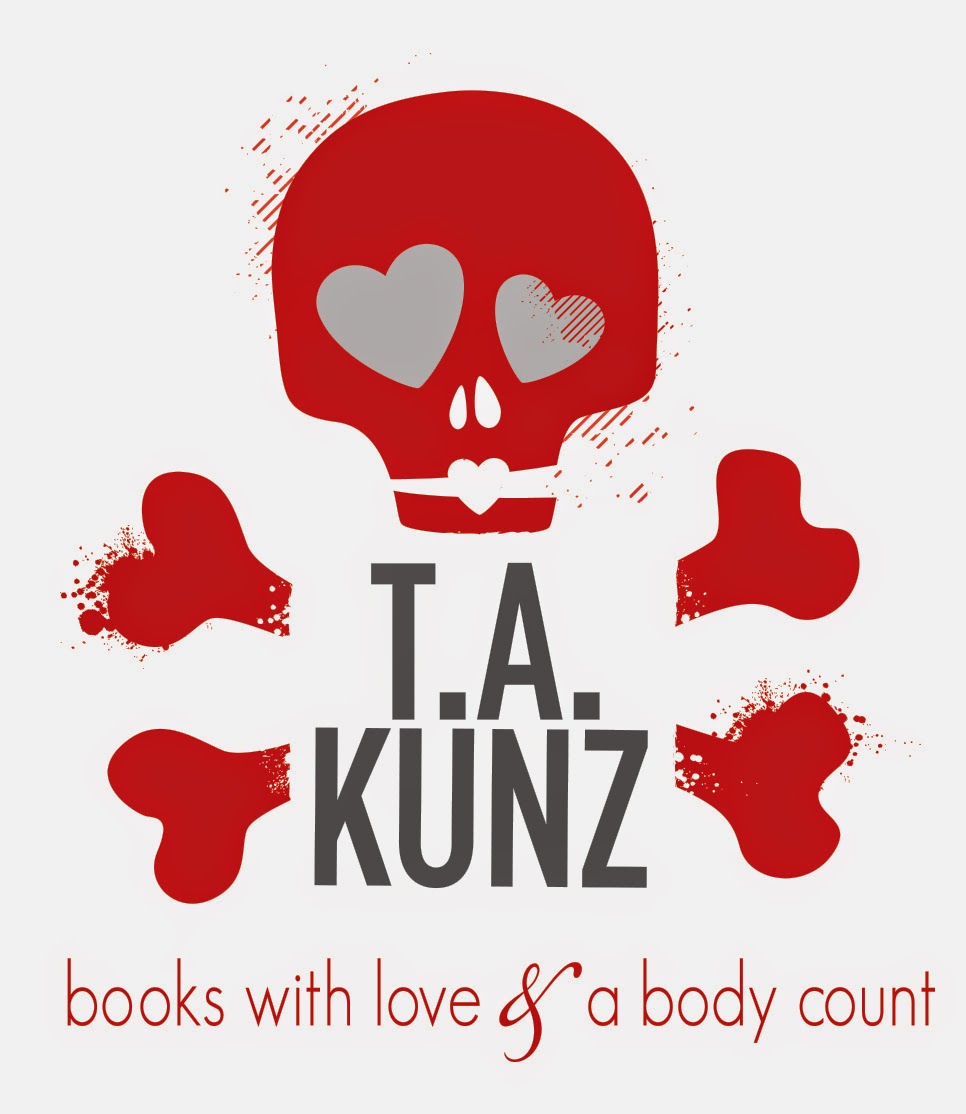 You can find T.A. at