Calls of the Untamed Blog Tour 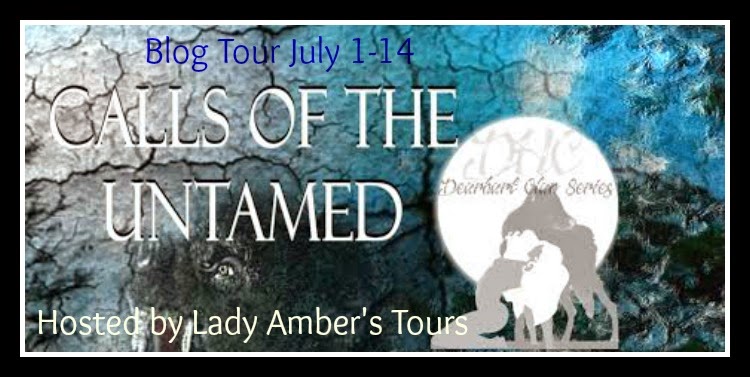 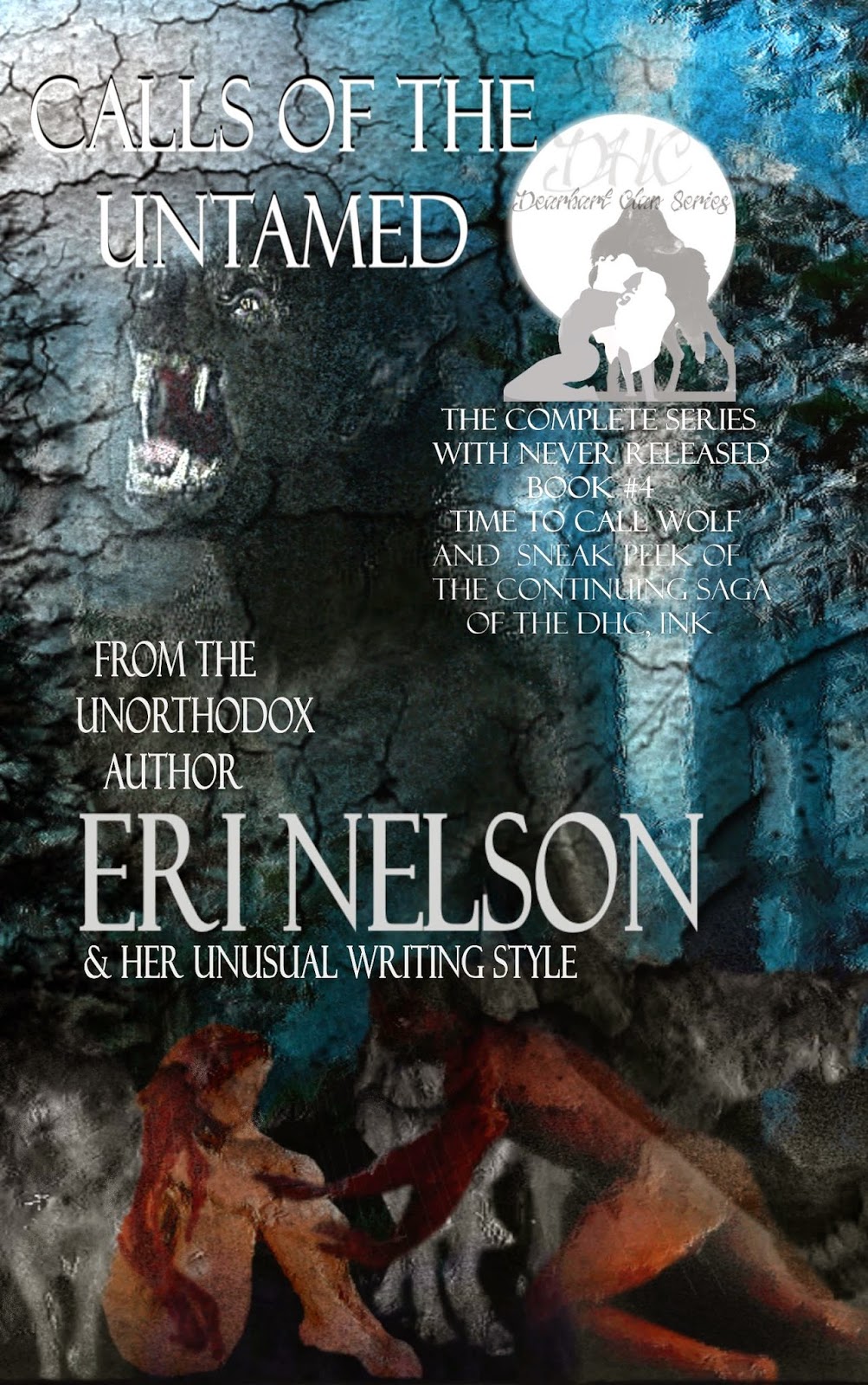 From the unorthodox author Eri Nelson began an adult new twist to an old tale. One where paranormal leads humanities’ darkest depths astride the backs of wolfly biceps.
Unlike most darkly lit romantic tales Eri’s vision takes an imprinting’s heat on a ride through the last of the packs inevitable extinction. Sought and found by a secret corner of the government a convenient weapon, such as the Werewolves, brinks on their own possible demise. However, as their leash is loosened by Opts itself one honor bound alpha encounters the Moon’s promise of hope in a luscious scarlet haired enticement. Although as the fur begins to rise in heated ecstasy a pack’s leader learns that, their brief run to safety hasn’t been their last.


With an ill mated Thomas the clan has more to comprehend as a pack. Now that not only has the alpha’s Kristen been found but now a twin who seems to promise the pack even more by the weight of her womb. Nevertheless, Julia will not be the only imprinted yet to be found for one aged prophecy seems to have come alive and brought the INK that will soon write the end to the pack’s current existence.

A Call Within:
~Every hair on Kristen’s arms raised as the eerie cries from their pursuers reached her ears. Seeing Owen tense told her he was gearing up to battle.
Gulping big clumps of fear down her throat, a coarse cry came from Kristen. “Is it Brinston?”
“If that’s the ex”—he spit out the ex part as if the whole knowledge that she could once bed a Shapeshifter revolted him—“then yes.”
Foot to pedal, Owen pushed the gas on the old Ford to its max. There was no way the old rusted-out bucket was going to run much farther ahead of the herd of shifters hot on their tail.
Claws on the roof screeched forth like nails on a chalkboard. They were on them, and it was a matter of the time before the truck would be thrown to the side of the road.
A figure close to the look of a rhino came in so fast that it crashed into the driver’s side of the Ford, knocking the panels inward. Kristen screamed in horror with the sight of the blood running down Owen’s left side. Now she was pissed off; how dare they touch him? An instant reflection of possessiveness’s of him was clearing the way for her rage as she looked to the floor of the cab for a weapon. Her fingers felt their way to something metallic. When lifting her prize, she found herself quite proud to be gripping a grease-covered crowbar. However, just as her courage was lifted by the odd shaped metal weapon, the large plate-protected creature once again drove into their vehicle, lifting it up off it’s axles. With one heave of its mighty head, it sent them flying over the edge of the road. Rolling repeatedly, they went, stopping only when they collided with a long-standing grand pine.
Bloodied and crash-ridden, the two found they were looking at each other. Owen, gazing on at Kristen clutching a blackened crowbar, said, “I don’t suppose if I asked you to stay here you would listen?”
“Not like hell,” she replied. If he were going out there, then so was she. Losing him was not an option!

Double Call:
With the wind came his scent and Julia took pause in her rapid pace. Scanning the ground, she caught the backside of him. Luckily, she was downwind and went unnoticed. With all mountains’ wind, that could change within a pulse. Deciding to hesitate in her movements to look him over could be a mistake. However, by the look of the backside of him, one she would be willing to make.
He was tall, well over her five foot nine stature. Julia could always hold her own in height with the males in town. Still it was nice to see a man who could perhaps make her feel delicate if only for just a moment, if any. At the pinnacle of his stature bore the broadest shoulders she began thinking she had ever seen. Even through his, thick fall apparel she could visibly see the contours of his tapered muscles. They seemed to fight the confines of his clothes and beg to tear free. If she did not resolve what he was from his scent, she undoubtedly could see now what he was by the build of him. She and her brother were the only two she would have ever known of and even that was not until this past year. This man shared the husky form and well-muscled sculpture of her brother. Although this Werewolf would easily outweigh her brother hands down.
She should move and gain ground for her attack but as he turned scanning the land, Julia found herself still to be held in awe of him. Chiseled features trimmed with a shadowing of sandy brown scruff to match his locks of wind-tousled hair. Minus the minuscule of gray that perhaps, only their kind would be able to catch up on. Add in his amber eyes and she could feel an inner turmoil like no other. For all the great works known to the world this man would surely be seen as one of them.
As he caught site of her she knew pausing the second longer on his sun warming eyes had been her down fall. Now it was run and run faster than she had ever in her life.
Tearing through the edge of the lumberyard and entering the forest line took all the strength she could muster. He was fast, too fast, and if not for the distance that had been between them, he would have had her in no time at all.
Their veneer of humanity ran too thin and as the pain creped forward Julia knew that this Were was bringing her wolf to the forefront. With the space amid them disappearing rapidly the urge to change came on chaotically strong. Her stride was pushed to its max and her skin could no longer coil from the oncoming touch. Just as his grip clasp on her the unfurling began and Julia could no longer hold back the pain of the unseen moon’s call.
The hellish howl of a wolf withering in pain filled the tree side. It was enough to stop her once tracker and now pursuer in his tracks. Through her huffing puffs of wolf in changing form, she heard him mutter, “It can’t be?” Then it was all she could do to remain conscious before everything including the arousing male went black.

Heated Call:
~She had been eyeing him from across the room most of the night. He had assumed she was either one of Julia’s friends or had been brought by someone. Jake had hesitated for the most part in approaching for he did not wish to flirt with another’s girlfriend. However, he would risk a possible fight over a woman…. for this particular woman.
They had talked for what seemed like hours, both devouring each other in conversation. Before Jake knew it he and Jo, her full name being Joanne but she made sure she had told him that she preferred Jo, decide to free themselves from the confines of the party and take a walk. It did not take long before they reached the wooden enclosure that stood off from the apartments. The eerie surroundings had always unnerved Julia but Jake with his thrill seeking nature enjoyed the hidden hollows that could be found inside. Stopping short of the cluster of tree’s entryway, Jake paused to see if Jo had a little bit of adventure seeking in herself. With a high-spirited nod from Jo they had thrown fear aside and walked within the darken confines. After a bit of feeling for their way, Jake found his favorite spot. The space held a fallen tree in which to sit upon and just enough of an opening from the trees had allowed the mystical orb above to poke through. A spellbinding location that gave allowances for the nightly glow of the moon. From the high perch skylight adorn by the night’s rich forestry foliages covering, grew life on the flow of the luminous rays. Unable to resist the beauty of the moment two heated bodies sought out each other beneath the glistening beams that came from the hours of darkness.
Hungry with lustful intent they shed their garments and glided their bare forms in zealous glee. Fanatical infatuation sparked flames and sent an unleashed inferno of passion down around them. She was sheer bliss and he was driven to devour her.
The suckling of her ivory peaks set Jake forth in claiming his ultimate prize within her womanly core. With his one true goal in mind, Jake thrust his tip forward to enter Jo’s womanly mound. In eager anticipation, she pushed her hips upward in a sensual glide to join with him. They merged while hunger clung to their backs greedily in search of a contented fulfillment.
Higher than the tree’s lengthy top, the moon felt the presence of a fallen child and began to call out for its return.
Ecstasy began to rise from inside of him. The heavy emotion found Jake pushing harder and faster to achieve completion. All the while Jo thrust upward trapped within her own wanted release. The harder he pumped his hips the faster his heart began to beat. In this frantic rhythm, the wilds contained by his unconscious soul began to come alive and demand its freedom. An insisting command that began to curve his spine and send Jake’s body in a convulsing retch of agony. Once the coursing heave started his anguish, Jake screamed into a partial howl that formed from his newly shaped snout. The sound was loud and earth shattering but it need not be for the woman who still lie beneath the now forming wolf. For she alone could hear and react with ultimate fear. Her frantic pulse of coursing blood seethed through her veins and spoke to the no longer in control Jake.
Fully wolf Jake snarled down on to his prey. Its screams put an ache within his ears and a desire to make it stop. His claws curled around her naked flesh as his mighty neck toss back and hurled force into a blood-curling howl. With the warning sung, he flew his jaw downward and snapped onto the soft meaty section under the morsel’s head. In one quick ripping movement there was quiet. 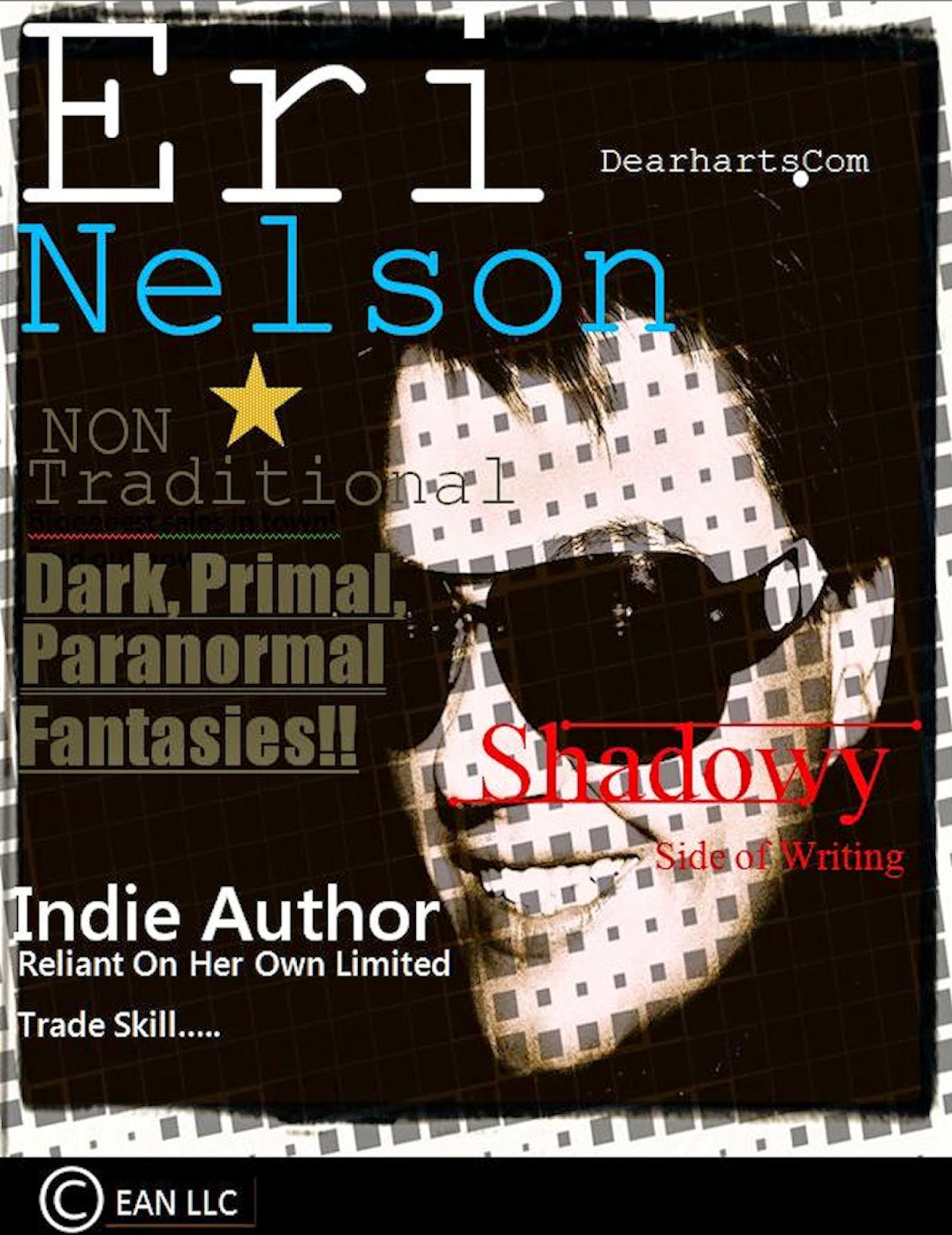 Eri Nelson born Erica Walcott is a Indie Author and the youngest of three in a family of five. Erica became Eri (airy) from her mother who called her that for as long as she could remember. The short take on her name took on a more solid base with the love of her life and husband, Jeff Nelson.

Together they have been for the past twenty years. Within that time they were able to raise one daughter and endless amount of pets.

Writing is a passion for her and an abundance of never ending joy. Only one thing tops that for Eri... and that is when a reader enjoys the read......

Eri Nelson is a nontraditional indie author who manages all areas of her fiction, fantasy, paranormal, action, adventure and sometimes-erotic writing. Eri handles all the groundwork of her books, even the editing. Because of this Eri strives to improve her abilities along with trying to explain to readers her far from traditional sentence structures. However, she will openly admit that typos follow her.

Join Eri and her shadowy side of writing as she takes you along to explore new desire hunger filled worlds where your mind can share in the heat of the read.