Earth as we know it no longer exists. Humanity has destroyed itself and with it any chance we may have had of returning.

What had started as a six month voyage through the stars becomes a nightmare when the passengers are stranded in space without hope. With Earth gone, the crew and passengers of The Dawn Light are left wandering the galaxy in search of a new planet. After years of searching, one is found, but no one is prepared for the terror that takes claim of the Galaxy Cruiser when one by one the people begin to turn, mutating into flesh eating monsters.

For Scarlett, Hunter and Rolf, this means being trapped in a sardine can full of piranhas. Their only hope... to get the hell out before they’re next, but someone on the ship wants to be the only survivor to reach the new planet and will do anything to stop them. But just how far are they willing to go?

Death no longer has a limit. 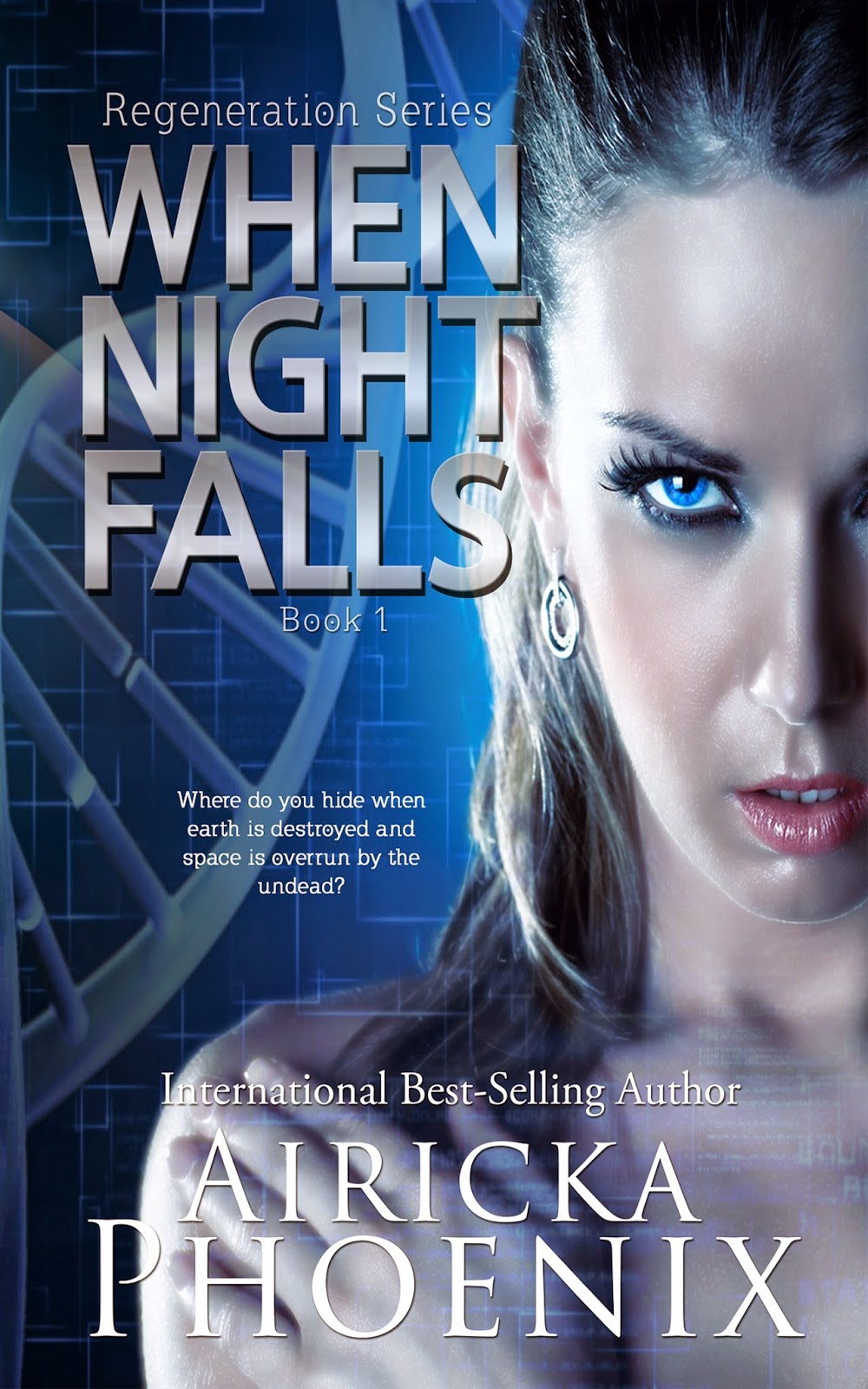 “Grams?”
A series of groans escaped the partly gaping mouth.
“Hunter! Get Dr. Ora up here now!” She took her eyes away from her grandmother just long enough to call over her shoulder. She didn’t wait to see if he’d do it. She knew he would. She turned her attention back to the woman on the bed. “It’s okay,” she said, putting a brave smile on her face. “Hunter’s going to get help. Everything will be okay. I promise.”
Grams continued to watch her with emptiness in her eyes. It was a cold sort of blankness. Scarlett had only ever seen it once before, when she’d gone to sickbay right after the riots. She had seen the patients locked behind the sheets of Plexiglass. There had been a sort of vacancy in their expressions as they stared off into space. Some were mumbling to themselves, rocking. Others just stood there, staring, saying nothing. Scarlett shuddered at the memory, at having it forced back on her by her grandmother’s equally jarring stare.
“Grams?” she whispered quietly, squeezing the frail fingers clutched between both of her hands. “Can you say something?”
A puff of air slipped past her cracked lips. The tiny, barely audible sound squeaked in the thick silence. Her mouth moved in what looked like words, but nothing seemed to be filtering through.
“What?” Scarlet brought her ear closer, hoping to catch even a syllable of what her grandmother was trying to say.
The arms came seemingly out of nowhere. They wound around Scarlett with strengths that should have been impossible for an old woman on her sickbed. She was dragged forward, landing in a flailing heap across her grandmother’s thin chest, her arms trapped at her sides. The pillow soaked her scream. A high hiss split the air, amplifying the panic running ice cold through her veins. The top of her knees struck the side of the mattress as she kicked, fighting to be free of the sour tang coating the inside of her mouth with every effected breath.
Pain so blinding, so white-hot, she nearly passed out from it, splintered through her shoulder. Something warm and sticky rushed down her arm. The sickening scent of blood perfumed the air. Scarlett shrieked. By some miracle, she was suddenly free, flying backwards and landing in a dazed heap on the floor beneath the bed. Numbing madness sunk cold fingers into her brain, seemingly freezing the world around her to a syrupy speed. She was only loosely aware of the groan above her, even less aware when the mattress squeaked and sheets rustled. The erratic pounding between her ears had only one focus—escape.
The carpet sliced through the soft tissues of her knees as she crawled to the door. She stumbled through just as another unearthly moan pummeled the chaos drumming within the walls of her skull. She scrambled, half-turning, half-falling onto her back, as she whipped around to see the deformed figure behind her, dressed in her grandmother’s floral nightdress. 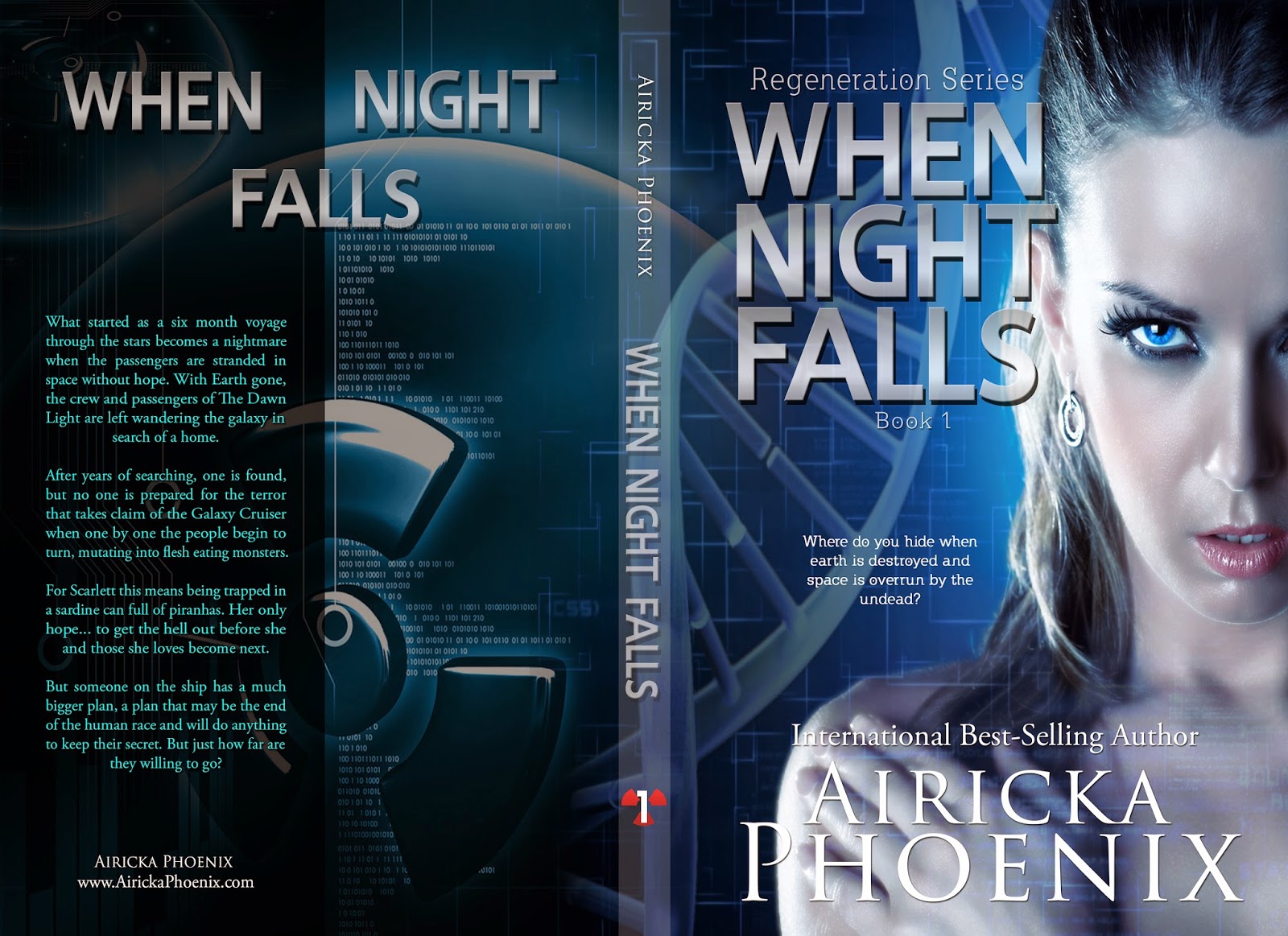 First impressions of When Darkness Falls: a dark, Dytopian, sci-fi version of Wall-E meets Star Trek and the Walking Dead.  It is freaking awesome!!! Airicka did an incredible job on a futurist sci-fi read that meets Trekky standards. There's mystery, action, gore, steam, loss and moments where I wanted to stop because it was too much. But know this: if you were a fan of Airicka's before, you will love her even more after reading this book, and if you are new to the world of Airicka Phoenix, welcome to the awesomeness. Buckle up and enjoy the ride!

Be sure to scroll all the way down to enter the Giveaway!! International Best-Selling author Airicka Phoenix lives in a world where unicorns, fairies and mermaids run amok through her home on a daily basis. When she’s not chasing after pixies and rounding up imps, also known as her four children, she can be found conjuring up evil villains, bad-ass heroines and swoon-worthy heroes to play with.
Airicka is singlehandedly responsible for her greatly anticipated collections, the Touch Saga, The Lost Girl Duology, The Regeneration Series, Games of Fire, & Betraying Innocence.

She also writes adult paranormal & contemporary romance under the dark guise of Morgana Phoenix. Be sure to check out her Sons Of Judgment Saga & My Soul For You.

For more about Airicka and the realm she rules with an iron fist—and tons of chocolate—visit her at: www.AirickaPhoenix.com