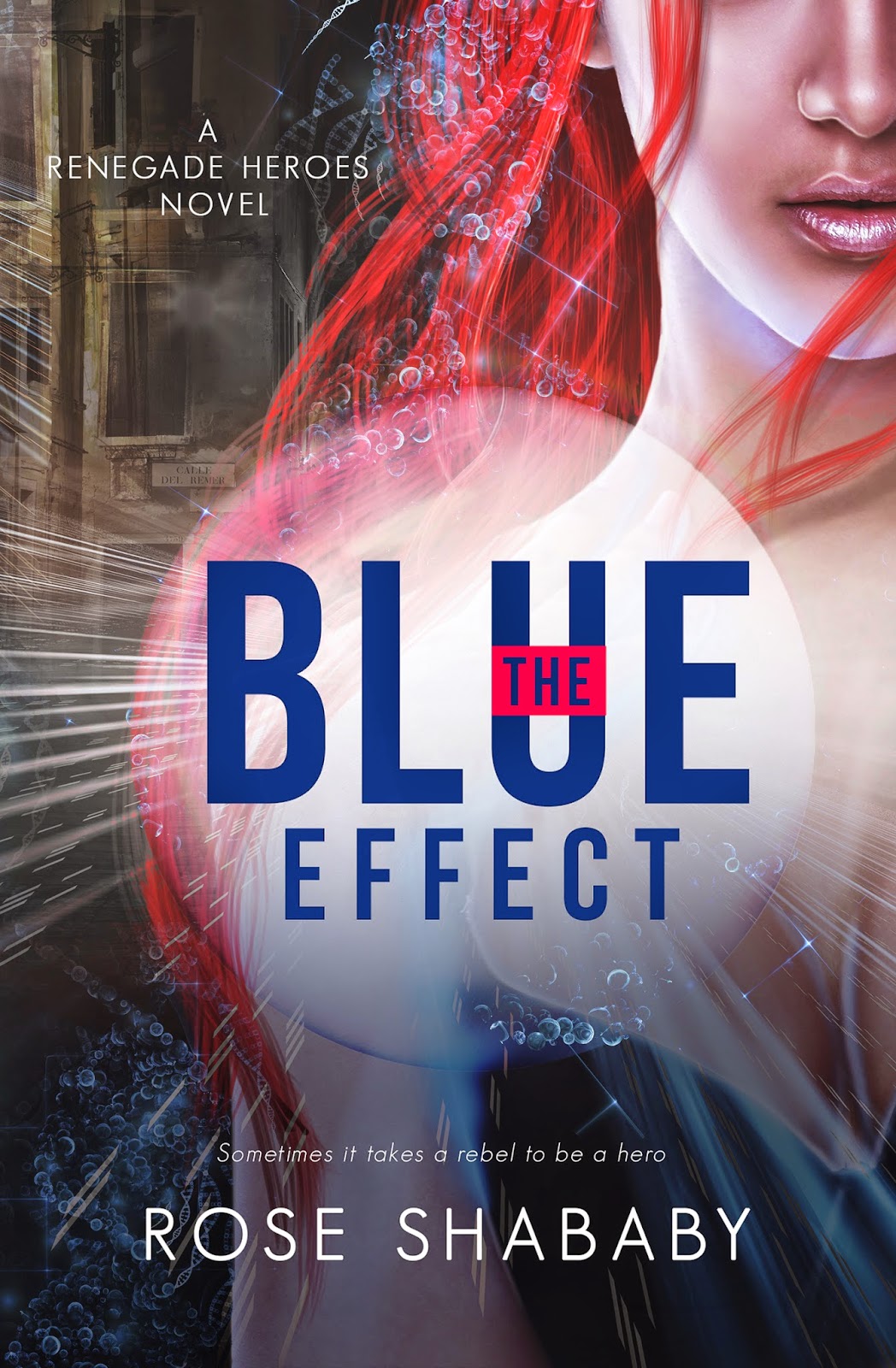 Blurb:
Blue Brennan is jaded and bitter despite her pinup girl looks and quick wit. Night after night, she scours the Seattle club scene looking for someone or something to fill the emptiness inside.
When she meets the mysterious Kasey, her world stops… literally. He claims she has the ability to control time and stuns her even further when he reveals his own gifts.
Blue is inexplicably drawn to Kasey and reluctantly enters his world filled with a new breed of humanity. They’re misfits like her, blessed or cursed with powerful abilities, struggling to hide their differences from the rest of society.
Then the group discovers a nameless, faceless sociopath with nightmarish powers; and he’s coming for Blue. She’s left reeling when they discover her gifts are the key to defeating his terrible evil and saving them all.
Now she must race against the clock to harness her own powers and save her new friends. Can she be more than a renegade? Can she be a hero too?

The Blue Effect is a non-stop thrill that caught my attention from the beginning. With the disconnect Blue has with everyone else, it made me wonder if something bad had happened to her. Enter Kasey: the first person to make her feel something. Given information that is hard to comprehend and the facts laid right in front of her, Blue has a decision to make.
I really enjoyed reading this book. It was hard for me to put it down, but I forced myself to save it for two nights; otherwise I'd be a zombie. Rose did an amazing job on the debut novel for this series and I cannot wait to read more about Blue and her new found friends. 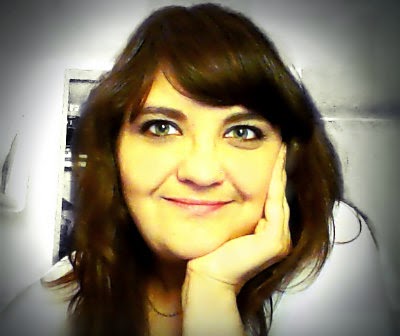 Author Bio:
Rose Shababy and her family reside in eastern Washington State. Rose grew up in the Northwest but swears she’s going to move to warmer climates someday. She’s claimed this for over 20 years, however, and has yet to move more than 75 miles away from her mother.
Rose has a deep love of all things Star Trek and yearns to travel the heavens, as well as an intense desire to be bitten by a radioactive spider. Unfortunately she sucks at science and math so she hasn’t been able bring her dreams to life, instead living vicariously through books, comics, television and film. She hopes to someday make a million dollars so she can afford to buy her way to the international space station, but she’d settle for being able to fly around the world and leap tall buildings in a single bound.
Rose also loves to cook and worked for years in a gourmet Italian grocery and deli where she learned to hone her skills. She prepares culinary masterpieces for her family, but fervently wishes the dishes would wash themselves. Especially now that her dishwashers/children are nearly grown and only one still lives at home.
Rose likes to use her free time wisely. For instance, she likes to daydream, will often read for hours until she falls asleep on the couch with an electric blanket and a warm tabby cat curled up on her hip, as well as spending cozy weekend days watching Syfy movies like Sharknado and Mega Piranha with her husband.
If Rose were a cartoon animal, she’d prefer to be a wise old owl or a sleek and sexy jaguar, but in reality she’d probably be a myopic mole with coke-bottle glasses. 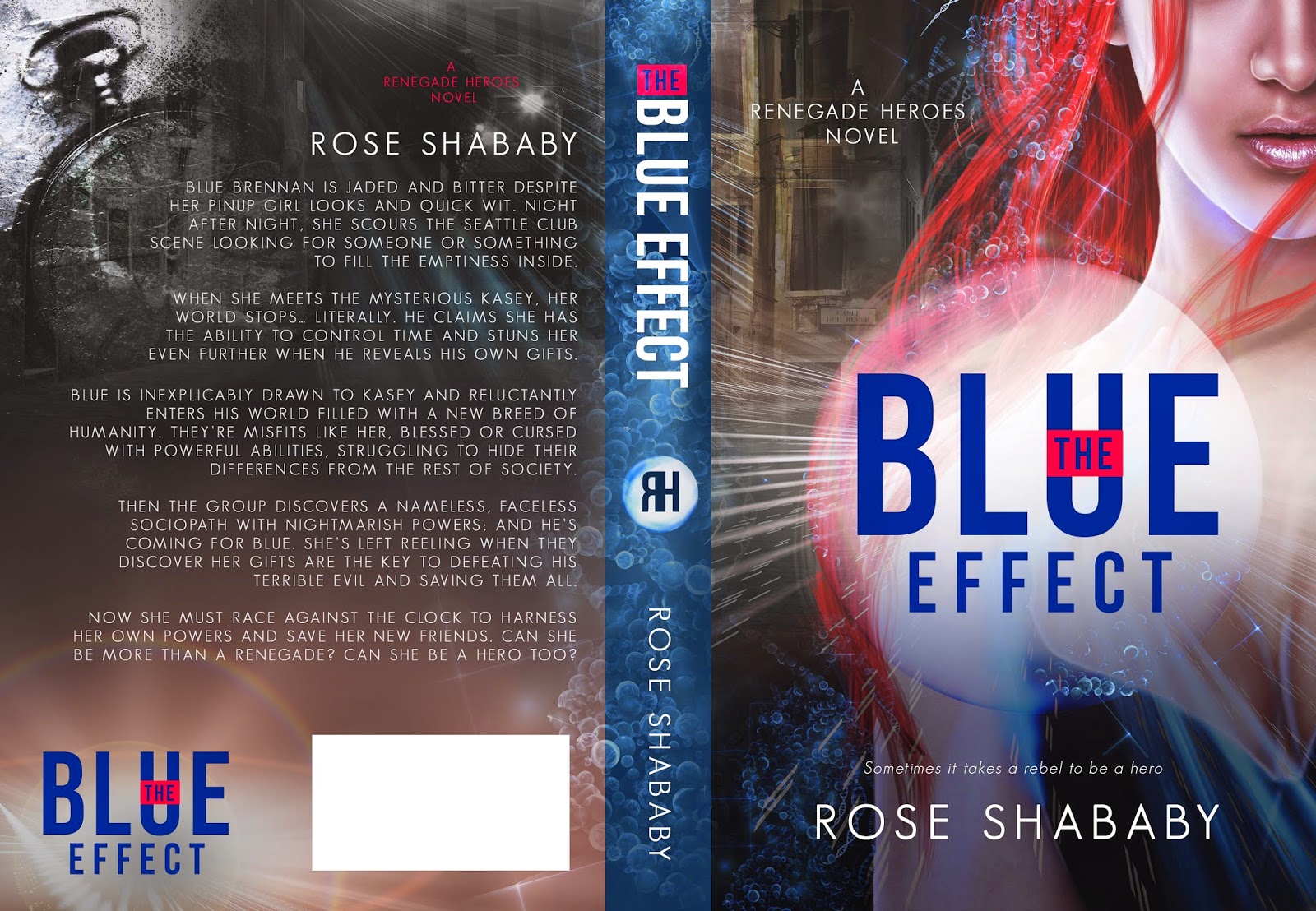 Author Links:
http://roseshababy.com/
https://www.facebook.com/rose.shababy
https://twitter.com/RoseShababy
https://www.goodreads.com/user/show/6063741-rose-shababy
Buy Links:
http://www.barnesandnoble.com/w/the-blue-effect-rose-shababy/1120028782?ean=2940046069686
https://itunes.apple.com/us/book/the-blue-effect/id904295984?mt=11
FB Party: https://www.facebook.com/events/851073488255363/
Excerpts:
Excerpt One
As I scanned the crowd my eyes fell on one person out of sync with the rest. Close to my age, maybe a little older, he obviously didn’t belong in the club. His clothes, messy looking slacks and a gray t-shirt, hung on his lean frame. He finished his look with a tartan scarf and brown fedora that seemed more at home on an old man than one in his twenties.
He pulled his hat off and shaggy brown hair fell across his eyes as he danced. Well, he didn’t dance so much as sway to the music, his eyes closed while a hint of a smile graced his lips. As he danced, he bobbed his head back and forth and his hands moved like graceful waves. His shadow grin seemed to infuse his entire body. He danced by himself as if he didn’t care what anyone around him thought, as if he danced for himself and no one else. He looked completely out of place, yet he appealed to me and I felt myself wanting to go to him.
I was shocked by the surge of jealousy that rushed through me as I stared at him. His face broke through my drunken haze and I realized this man was no paper doll. His face belonged to a truly happy man. Hell, he looked fucking ecstatic.
He had the face of an angel.

Excerpt Two
“Kasey,” I yelled stupidly, knowing it wouldn’t do any good but unable to stop myself. “Kasey, where are you?”
I burst through another door to find the bathroom, a layer of steam frozen in the air. I pulled the curtain back without even thinking about who might be in the shower, and slumped with relief when I found Kasey. He held a washcloth to his face as a stream of water rained down on him, frozen in place.
“Kasey,” I breathed happily, and reached out to grab his hand.
As I touched him, the same spark I always felt when we made contact erupted and the world came to life again. Water spewed all over me, soaking my clothes, spilling over onto the floor, but I didn’t care.
Kasey startled and yelped a little when he saw me. He recovered quickly. “Blue? What happened?”
I smiled, my tears mixing with the hot water from the shower as I launched myself at him, hugging him tightly. He smiled back and wrapped his arms around me.
Thank god I found you! I thought. “I’m so glad you’re here,” I whispered in his ear.
“I knew you would come back,” he whispered back, just before his lips found mine.

Excerpt Three
Clearly the time had come for the two of us to have it out. “I may have thought you were hot when we first met, and you got to listen to the nasty thoughts in my head, but every time we meet I find it harder to like you. In fact, every time you open your mouth, you get uglier and uglier. I don’t know if Val was right, and you really are jealous, but let me make this crystal clear for you. There is no part of me that wants you.”
His eyes narrowed for a moment, and then, before I could do anything, his hands shot out and grabbed my shoulders again. He yanked me close to him and I the heat from his chest burned through my t-shirt. His face was so close to mine I could feel his hot breath blazing against my cheek when he spoke. “You’re a little liar,” he hissed. “There is a part of you that likes this,” he shook me a little and I flushed with rage… and something else. “And goddamn me, there’s a part of me that likes it too.” He hovered with his face still close to mine and for a moment I thought he was going to kiss me. My head fell back slightly and my lips parted involuntarily as I anticipated his invasion.
Then he released me, almost flinging me away from him. I pressed my back against the wall as I watched him and tried to catch my breath as my traitorous heart beat so hard I thought it might burst out of my chest.
“Let me make this crystal clear for you,” he mimicked. “Kasey is like a brother to me and if you hurt him, you’ll wish you never met me.”
“I already do,” I whispered with sincerity.