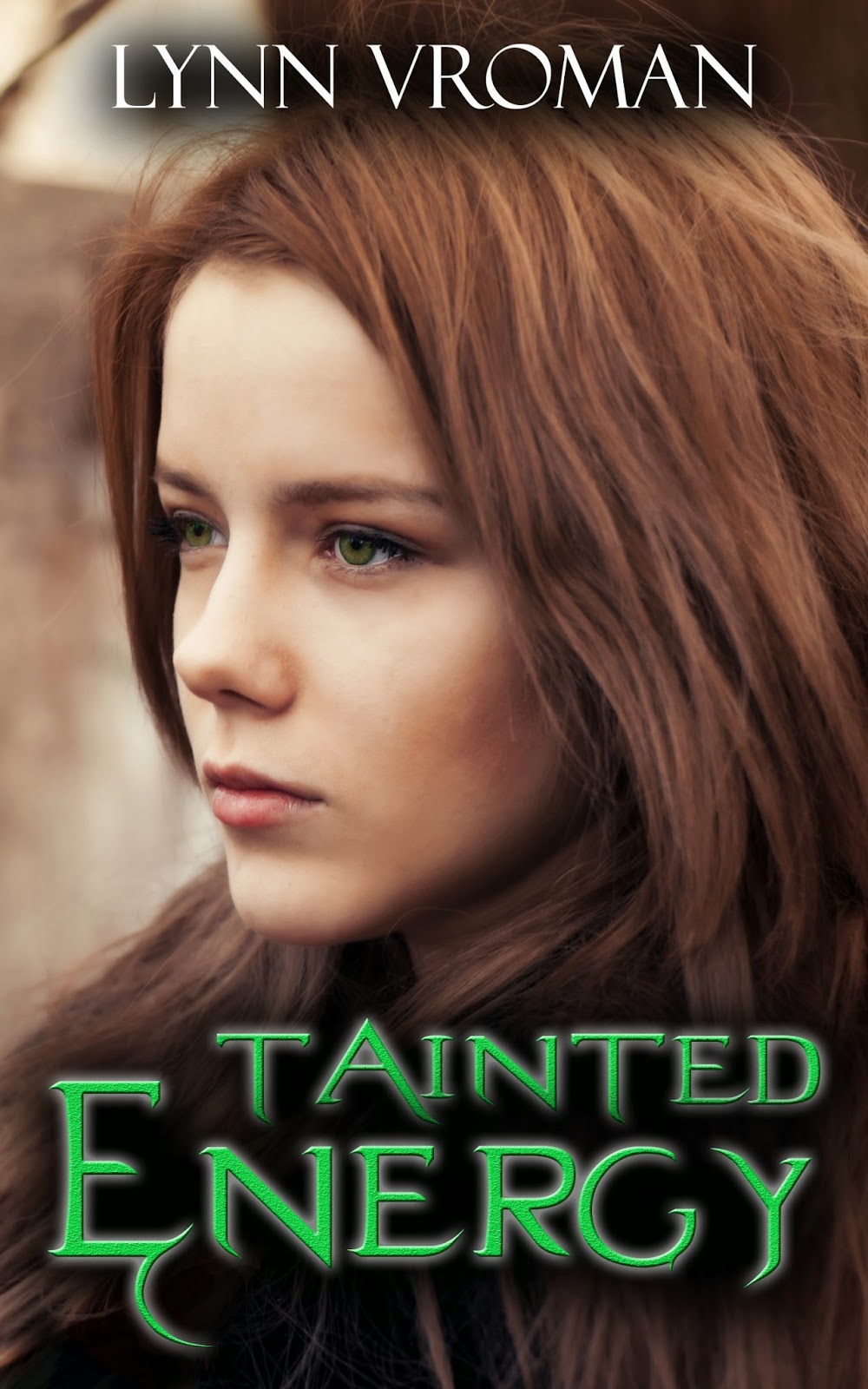 For seventeen-year-old Lena, living in the trailer park with the rest of town’s throwaways isn’t exactly paradise. Dealing with a drunken father who can't keep his fists to himself doesn’t help matters either. The only good thing in her life, other than track, is the mysterious man who visits her dreams, promising to find her.

When a chair burns her arms, Lena chalks it up to stress-induced crazy. Yet as bizarre incidents escalate, even being crazy can’t explain it all away… until one day dream guy does find her.
Tarek lost Lena seventeen years ago after she was accused of treason and marked Tainted. He finally discovers her reborn on Earth into a life of suffering as punishment for her crime. However, someone else has already found her… and wants her dead. Willing to sacrifice everything, he fights to keep her safe so she can live the only life she’s ever known—even if that life doesn’t include him.

Nothing annoyed me more than crappy best friends. The type who did stupid stuff, like grab my shoulder and scream right in my ear, "Help me, Barbara!"
I jumped and a cloud of popcorn exploded above us. The kernels remaining in the tub I threw in Zander's face.
We sat in the back row, Night of the Living Dead on the screen. No emergency exit signs interrupted the darkness, adding a little more to the scare department. But Zander killed the mood as soon as the graveyard scene popped up.
"You promised to watch, now watch." I chucked the popcorn tub at him when he wouldn't stop laughing.
"Fine, but my hands are stayin' in my pockets this time." He rubbed the tiny crescent-shaped marks on his left hand. "I have no idea why you watch these things. You can't sit through one without a week of nightmares."
"Not true. The Ring was just extra freaky."
"Ah, and so were The Shining and Paranormal Activity..." His southern accent rolled off his tongue like sap from a maple tree. "I think you like bein' afraid all the time."
I hated it when he was right. "Shut up."
Fear triggered the fight-or-flight mechanism in our brains. The signal that proved we still wanted to live. That was my theory, anyway.
Maybe I was a masochist, but I did like experiencing the fear. It ensured the numbness hadn't completely taken over. Numb could be good. A takeover, though…not so good. Zander shoved that logic in my face and smeared my nose in it every time I decided to make sure fight or flight still worked.
"All right, but when you're lyin' in that floating bed tonight, don't expect dream guy to save you."
"Don't worry." I slumped in my chair, focusing on the screen. During a weak moment, and after a couple stolen beers from Dad's case, I told Zander about Him–my dream guy with gray eyes and dimples. He acted odd afterward, especially when I admitted what Him always promised: I'll find you.
Yeah, Him was what I called my imaginary guy. No one ever accused me of being creative. Point was, for the last month Zander decided to make a joke of it. I'd never told anybody about my dreams, and I guess I should've kept it that way.
Hey, self, remind me again why Zander held the bestie slot? Oh, right. He was the only one who applied for the position.
The next hour we watched in silence. I'd seen this movie at least ten times already, and so his concern of me mauling him never happened. 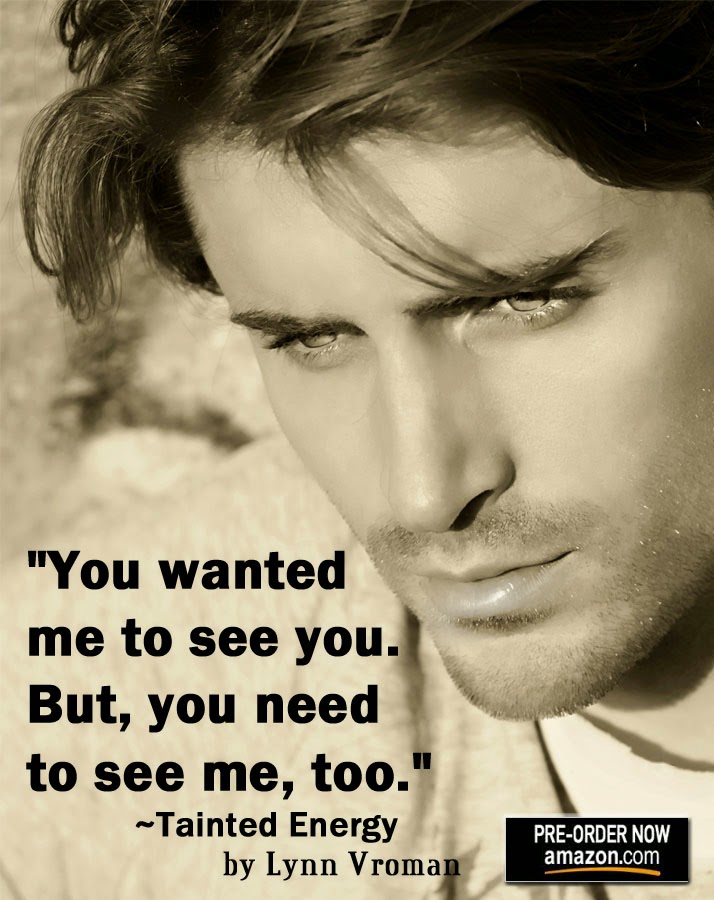 About the time Barbara annoyed everyone in the house with her relentless Where's Johnny question, Zander's constant slurping and ice-crunching crawled under my skin. "It's empty."
He took one last noisy sip and stood, blocking my view. "I'm gonna get a refill. You want one?"
"No. Christ!" I bent and twisted to see around him while he countered every move with a grin. I didn't want to admit it, but that grin always caused my brain to cloud. Hell, having him within a ten-foot radius caused a huge case of head fuzz. But to be clear, I wasn't the only mountain dweller who found that smile, or that accent, hot.
"Suit yourself. Be back in a sec." He gathered up some empty wrappers and went out the door, creating a quick flash of light in the room.
Once he left, it didn't take long for the dark to fold me into its arms as the moans on the screen grew louder. When a particularly menacing zombie ate Barbara, I let out a tiny yelp–even though I knew it was going to happen. My face heated, and I looked around, happy no one witnessed.
I'll go with coward for $500, Alex.
Sinking deeper into my seat, I watched the whole house get taken over by zombies, my heart pounding and the hairs on my arms standing at attention. Two minutes alone and I was already freaked out.
I gripped the armrests, stealing a glance at the exit. My nails dug into the plastic. Leaving was the obvious remedy, but my legs refused to walk toward the door.
A zombie eating black and white brains filled the screen.
Screw this.
I was out of there whether my legs were ready or not. Yes! Fight or flight still in perfect working order.
Zander was right. I had issues.
I planted my feet on the cement floor and tensed to run. As I hopped up, my arms refused to come with me. I made the mistake of looking down.
What the…?
The armrests curled around my hands, the plastic ends separating into thin, spider-like fingers. I screamed, trying to yank my hands away, but the armrests became stronger, forming rows of fingers that encased the whole length of my arms, burning them. Tears flooded my vision, the pain branding my skin.
Panic turned into terror when the theater filled with whispers that brushed through my hair like wind and hit me in the face like an open palm. The whispering slipped into my throat when I opened my mouth, gagging me while it pushed me back into the seat. I struggled as the chair sucked me in and gasped for enough air to yell, the sound coming out as a grunt.
My head stayed glued against the seat, my scalp searing as I tried to yank it free. Then the movie stopped playing. Total darkness swallowed me, the blackness stealing the last drops of my courage. No matter how hard I tugged, my arms refused to pull free. I strained to turn my head toward the exit, but it stayed nailed to the chair. All I could do was look forward and try to relax my arms to stop the burning.
The whispers grew quieter, and the hold it had on my head weakened when I stopped moving. I cleared my throat. "Zander!"
My arms loosened a fraction.
"Help me!"

I absolutely fell in love with this story. The characters, the plot, the excitement of it all- amazing! Lena lives in a craphole and is the only life she has ever known. She dreams of escape with her mother but a turn of events threatens to take it all away. Her life is now upside down and backwards and what appears to be all a dream is turning into reality.
Tainted Energy will suck you in will leave you wanting more. Trust Me. 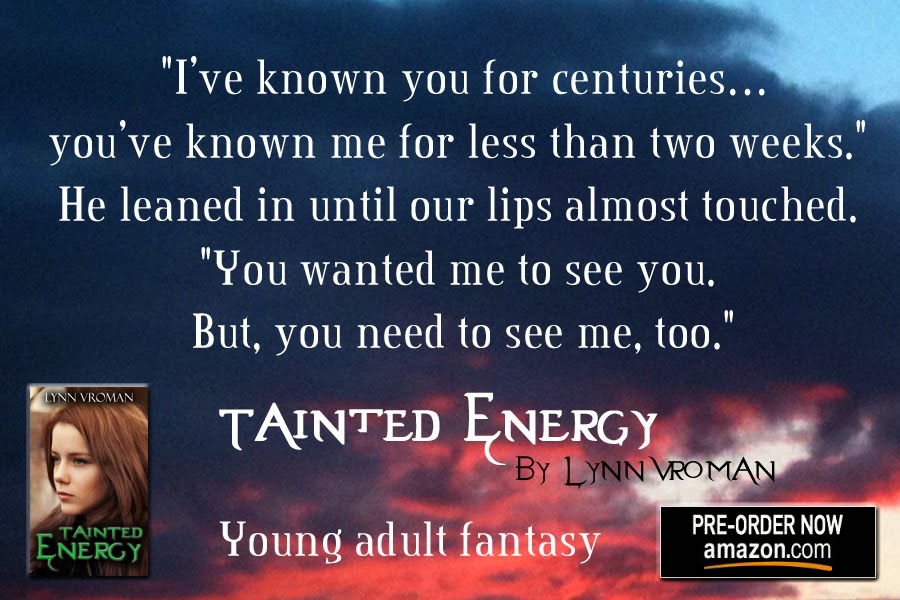 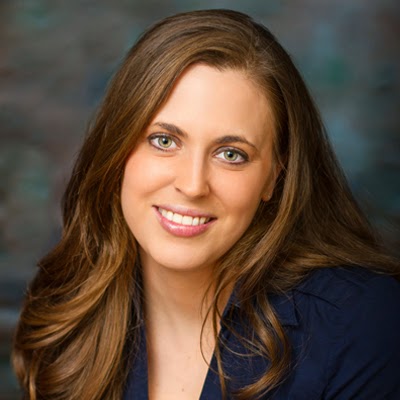 Lynn Vroman
Born in Pennsylvania, Lynn spent most of her childhood, especially during math class, daydreaming. The main result that came from honing her imagination skills was brilliantly failing algebra. Today, she still spends an obscene amount of time in her head, only now she writes down all the cool stuff.
With a degree in English Literature, Lynn used college as an excuse to read for four years straight. She lives in the Pocono Mountains with her husband, raising the four most incredible human beings on the planet. She writes young adult novels, both fantasy and contemporary.