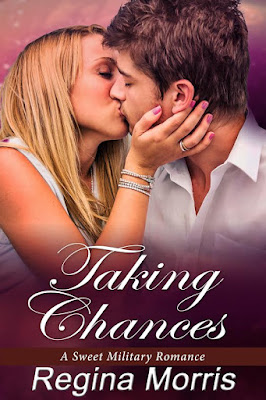 Blurb:
Heartwarming, sweet romantic short story about a soldier wounded in battle who finds love where he least expects it. Amputee Corporal Tommy Johnson is rehabbing in a VA hospital near his small hometown in Texas and hiding from everyone, but a nice surprise of events helps him to have his happily ever after.

This short read was very sweet and about the unknown.  Broken engagement, a disappointed father, an emotional mother, what else could a wounded soldier ask for? Tommy has no idea that his sweet nurse remembers him prior to his injuries. Always professional, Abby treats Tommy no differently because of their awkward past. Once the truth is out, what will become of their friendship; find out in Taking Chances.

I’m a part-time writer who would love to quit her day job and become a full-time writer. Tea and chocolate fuel me so that I can write at night and on the weekends whenever I can find the time.

I have lived in many different parts of the world, and grew up on military bases. My father was career military and CIA; his father worked with the Secret Service. I graduated high school in Germany and I attended the University of Texas at Austin where I received a degree in Computer Science with a minor in math. My specialty is social media and I love connecting with people.

I do many giveaways and online parties with freebies and a lot of fun, so please join me on social media and subscribe to my newsletter.

"Tommy took a deep breath as his eyes traveled from the woman’s hair, down her shoulders, and then to her hips and legs. She was wearing a dress under her white blazer. A yellow floral dress with white shoes. He hadn’t realized how long it had been since he had seen a true civilian. His life had been filled with green fatigues and military boots for so long.

Standing there in that dress, she may have been the most beautiful woman Tommy had ever laid eyes on. When his eyes traversed back up their path, and again he saw her angelic face, he knew she was the most beautiful, by far."