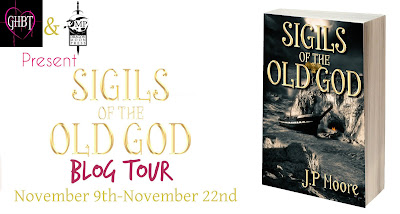 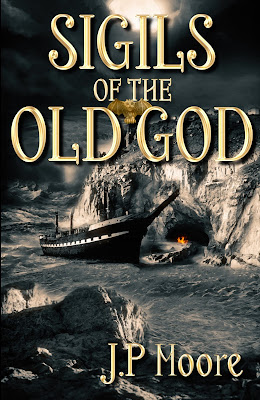 Listen carefully. You may hear whispers of the city’s mysteries just below the howling of the wind through the rafters of the abandoned fish market. Odd creatures serve a witch in the haunted salt marshes. Sigils of ancient and forgotten magic mark the cliff overlooking the bay. A ruined stone tower of unknown age stands in the square. Do not speak too loudly of these mysteries, lest the Old God send his servants to silence you.

Fear Jacob, the most loyal and gifted of these assassins. He has killed many, from babbling ex-sailors who uncovered too many secrets in dark and faraway lands, to millionaires’ wives who summer in mansions on the cliff and wander one step too far into the occult.
But peer into Jacob’s eyes and you may see a hint of doubt. You may discover what you have suspected all along.

History is a lie.

The world is not what we think it is.

And, it is all about to come crashing to an end.


J. P. Moore’s newest horror/fantasy novel, Sigils of the Old God, is now available from Dragon Moon Press. Sigils tells the story of Jacob, an assassin who serves a mysterious force that slumbers beneath the mysterious 19th century city of Jamesport, Rhode Island. Jacob finds himself in the center of an ancient war for the truths of a hidden history, and for the powers that sit at the very heart of the planet. Moore is also the author of the award-winning Toothless, a genre-bending and spellbinding zombie apocalypse novel set in the Dark Ages.


Below, he shares thoughts on the perfect soundtrack for the novel.


I love, and rely on, big and booming movie soundtracks. Give me any soundtrack from Howard Shore or Hans Zimmer, and I’ll come out of it with a novel idea. This music all becomes really important to my process. I even script milestone scenes to tracks from these scores. I don’t have notes on those scenes, just these tracks serving almost like forward-looking oral history, mapping out what I want the scene to do, feel like, and be.


That said, I searched a long time for a Sigils of the Old God soundtrack. I had the map of the final scenes in “Time” from the Inception soundtrack, but the rest of the book defied that kind of strong connection. For a while, it became a good reason to avoid writing. Without the music, I thought, I surely couldn’t get my head wrapped around the book. That resulted in a lot of time looking for that soundtrack.


I have two standby soundtracks for cases like this one: A Beautiful Mind (which, now that I think of it, is neither big nor booming) and Gladiator (which is kind of both). With those queued up, I was able to plow ahead.


I leave it to the reader to connect the dots between tracks and scenes. “Time” from Inception is an almost perfect overlay, but the rest is a bit more of a puzzle. I hate doing puzzles, but love to pose them! 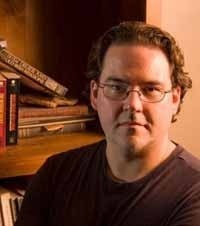 About the Author-
J. P. Moore lives and writes in southern New Jersey. Though his characters would feel right at home in the dark and mossy tracts of the Jersey Pine Barrens, the setting that he enjoys with his wife and three children is a long way from the worlds of his novels and stories. Moore's settings are on the brink. Their histories are lost, or misunderstood. Their futures are uncertain. All of the heroes are gone. Only the unlikely heroes are left.

a Rafflecopter giveaway
Posted by Crystal at 10:27 AM