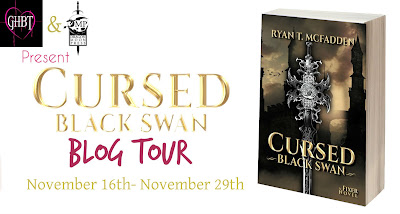 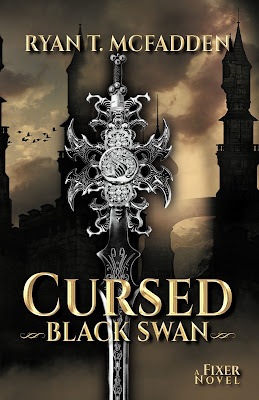 "Let's get one thing straight—I'm a fixer. You need someone murdered? Then hire an assassin. You need something stolen? Call a thief. But if there's something no one else can do, or a job that no one else wants, then you talk to me."
Nathaniel specializes in the strange, the weird, and the dangerous. But no matter how far he runs, he can't leave behind his bloody past, nor the ghosts that chase him.
His latest job was supposed to be simple—recover the sword Black Swan. Except there's no such thing as a simple job. When the operation goes bad, the Crucifiers, the Crooked Hand, assassins, and Crusaders are all hot on Nathaniel's trail...for a sword he doesn't even have. All he has to do to get it back and set his world right is to find the woman of his dreams...and kill her.

Creed - An ugly giant of a man with a murky past.

“He was not an attractive man and as he laid eyes upon the sword and his concentration heightened, so did his ugliness. His body was a slab of meat with large, oversized hands even too large for his monstrous body. While his left eye was blue, his right was white, perhaps useless. He had no hair, but his scalp was so laden with scar tissue, I wasn’t sure he could grow any. His face was almost as equally scarred. His exposed hands and arms were covered in a matte of dark, course hair.”

His strength and anger are near limitless, and as Nathaniel discovers, nearly indestructible. However, he driven not by rage, but his desire to be reunited with his love:

My love's name was Aliénor and she made me whole. Several lifetimes ago, I made a terrible mistake— one that I regret every moment I am on this earth. Ironically, my mistake allows my time to never end. Now, I will rip apart heaven, earth, flesh, and bone to get her back. I know that you'll do the same. Black Swan is the instrument to make me whole again. It's the instrument to make you whole again.

Jane - Like Nathaniel, she was an outsider to the desert city of Cresek-Tawn, but that didn’t stop her from becoming one of the most proficient and sought after killer for hire. Despite this backdrop of violence and crime, she and Nathaniel became lovers, and they spoke of leaving that life behind to be with each other. Until Nathaniel’s master discovers their affair and orders her brutally murdered. Nathaniel runs, unable to cope with the pain of losing her forever.

Then, years later, he sees her in a crowded bazaar, a world removed from Cresek-Tawn:

She was as stunning now as she was back then. Athletic build, lithe movements. Graceful. Black hair hung in gentle curls past her shoulders. Her arms were well toned and her shirt accented her perfectly shaped biceps. She wore the fashions of Havencastle, as if she had been here a while. A short dress with exposed back. Only her shoes gave her away as a foreigner—brown sandals from Cresek-Tawn. I caught her before she noticed me.
I grabbed her shoulder, expecting that she'd pop like a bubble in the wind.
She didn't.
Jane spun so fast I barely registered the motion. Her dagger was at my throat, pressed so tightly that I felt the immediate trickle of blood.

While this should’ve been a happy reunion, Nathaniel can’t help but wonder: how did she survive that night five years ago when he saw her murdered? Had it all been a ploy? Had she played him? And why did she end up here in this crowded bazaar - is she here to love him...or kill him? 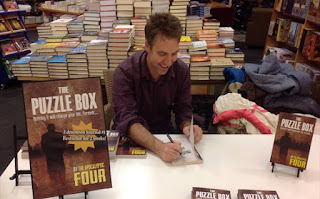 About the Author-
Ryan T. McFadden is a writer of fantasy and horror, with short stories and novellas published through Dragon Moon Press, Edge SF & F, and Absolute X-Press. In 2014, his novella Ghost in the Machine won the Aurora Award (Canada's most prestigious award for SF&F) for Short Fiction.
His motley past involved such dangerous work as database administration, ice cream flavouring (seriously, that's a thing), hockey league administration, screen printing, web design, furniture building, and home renovations.
He lives in London, Ontario, with his two beautiful, but sometimes diabolical daughters, who he is sure are plotting to one day overthrow him.

a Rafflecopter giveaway
ed
Posted by Crystal at 12:30 AM