Daughters of the People Series by Lucy Varna Blog Tour and Giveaway! 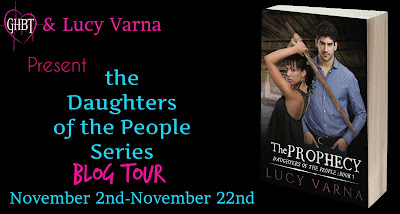 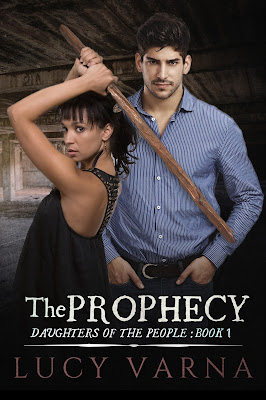 
Maya Bellegarde has spent her entire life searching for a way to break the curse hanging over her and her People. As part of her quest, she volunteers to investigate an anomalous burial at a Swedish archaeological dig where a rare cache of documents has been discovered side by side with an ancient symbol linked to the Seven Sisters, the progenitors of the People.


While in Sweden, Maya meets James Terhune, an attractive archaic language expert, and invites him to take on a position at the Institute for Early Cultural Studies, the People's main historical research branch. James is thrilled by the opportunity Maya extends and intrigued by the attraction he feels for her. He soon begins to suspect, however, that the secrets of the grave are minor compared to the secrets Maya holds, secrets that could hamper their burgeoning relationship and cripple the work they've undertaken for the IECS.


The People aren't the only ones interested in the newly-discovered documents. An ancient enemy of the People resurfaces, threatening the lives of Maya and James' loved ones, and setting in motion a chain of events that could save the People, or destroy them. 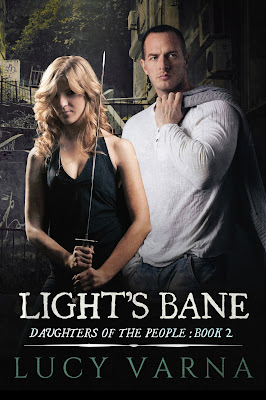 Daniella Nehring is a fierce warrior with a turbulent past. Born in the earliest days of World War II to unknown parents, she was raised by Rebecca Upton, one of the People’s most notable leaders. Dani has always had questions about her parents’ identities, information Rebecca refuses to reveal, leaving a gaping hole in Dani's own identity.

Dani travels to New York on Rebecca's orders to search for the mysterious woman who stole a copy of the Prophecy of Light from the People. There, she teams up with Dave Winstead, an FBI agent working undercover with the People's most ancient and deadly enemy. Dave has a soft spot for the young warrior that divides his loyalties between her and the job he took in order to fulfill a promise he made a decade and a half before, a promise he's determined to keep, no matter what the cost.

As Dani and Dave are drawn deeper into the hunt for the missing artifact, Dani's immortality is jeopardized, and with it, her ability to reclaim the Prophecy tablet. When she learns the truth about her heritage, Dani must confront her past in a struggle that will change her life forever. 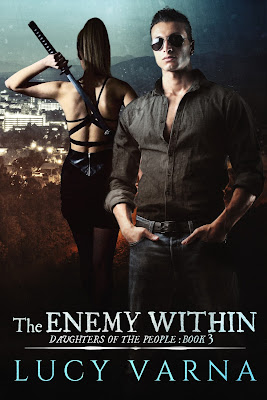 After fourteen years, Indigo Dupree returns to Tellowee, Georgia, to face the past she left behind. She's tried of running, tired of hiding, and wants nothing more than to help her mother through the final days of her pregnancy. What she doesn't want is to become romantically entangled, not even to the sinfully handsome Bobby Upton, whose kiss sent her fleeing a decade and a half before.

Bobby is the son of the Blade and a ruthless warrior in his own right. At sixteen, the age of manhood among the People, he tried to claim the woman he loved and failed, and spent the next decade hacking his way through Uncle Sam's enemies. Now a successful businessman, he's given the task of tracking down the People's enemies, including India Furia, the twin sister of his heart's only love.

Duty demands that Indigo atone for the sins of her sister by helping to bring her in. India has other ideas, ones that draw Indigo and Bobby into a deadly game involving the Prophecy of Light, forcing Indigo to choose between her duty and her heart. 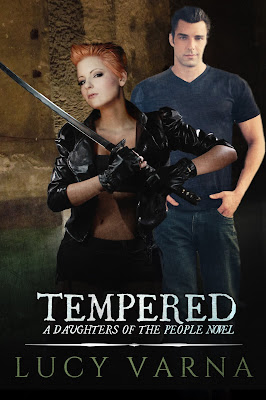 Among the People, Hawthorne the Chronicler is well-known for two things: Her faithful rendition of their history and her inclination to behead those who betray her. To mortals, Hawthorne is better known as Al C. Hawthorne, a fantasy writer with a stellar imagination and a knack for complex stories. It is in this guise that she must track down the sources of comic book illustrator Aaron Kesselman's modernized tales of Rebecca the Blade.

Hawthorne's blunt words and lithe grace intrigue Aaron, enough for him to take her up on the offer of sharing her bed. Before he knows it, his heart begins the fall into love, a fall he's willing to take if only he can persuade Hawthorne that she isn't a two thousand year old immortal descended from one of the most ruthless warriors in British history.

The past isn't the only obstacle standing in the way of true love. The Eternal Order is on the move, targeting key members of the People in their never-ending quest to extinguish the Light. Hawthorne soon learns that a strong arm and a sharp blade aren't always the best weapons in a Daughter's arsenal, especially when her heart is involved. 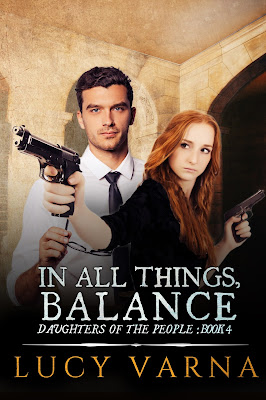 In All Things, Balance
Daughters of the People # 4
By- Lucy Varna
Genre- Fantasy/ Romance /Romantic Suspense

The People are in a time of great need. The Prophecy of Light has been rediscovered, the Eternal Order constitutes a growing threat, and the IECS Archives may hold the key the People need to forever be free of An’s curse.

Moira the Reluctant, immortal Daughter of the renowned Rebecca Upton, journeys from her home in Ireland to assist with efforts to locate Sanctuary, the legendary refuge of the Seven Sisters. There, she meets Tom Fairfax, a reserved archivist tasked with organizing and modernizing the Archives. Tom is everything a Daughter could want in a future mate, handsome, intelligent, and kind. Above all, his touch arouses her in a way no other man’s ever has.

The moment Tom spied Moira, his heart tangled into a knot and hasn’t loosened since. The beautiful Daughter has a sharp tongue and a temper to match, and is not at all the kind of woman he dreamed of calling his own. In spite of the attraction he feels for her, Tom goes out of his way to avoid the fiery Daughter, determined to protect himself from certain heartbreak. Moira is equally determined to have him, regardless of his apparent infatuation with another Daughter.

When Moira’s brother is kidnapped, she and Tom are thrown together in a way neither anticipated, forcing them to trust one another or risk losing their budding love under the crushing weight of the Order’s never-ending quest for continued immortality. 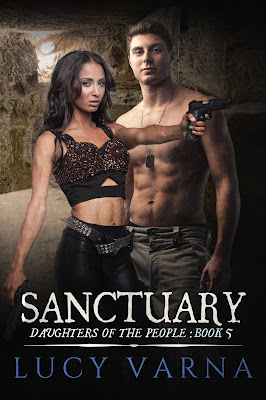 Jerusha Mankiller has found herself in a lot of tight spots during her century and a half of living, but her current assignment takes the cake. Her mother, the formidable Blade, has sent her halfway around the world to investigate clues to the locations of Sanctuary and the City of the Sisters. The catch? Her cover is as the wife of her brother’s best friend, a former Delta Force Operator with a smart attitude and a wicked smile.

Playing somebody’s husband isn’t a new cover for Drew Martin, but it’s the first time he’s partnered a woman he’s got the hots for. Unfortunately, Jerusha treats him like her kid brother, and when she’s not, she’s instituted a strictly hands-off policy. One kiss wouldn’t kill her, would it? And at least then he’d know if the wild attraction tugging at him affected her, too.

Tracking down decades-old leads isn’t exactly easy, though. Soon, Jerusha and Drew have their hands full countering the problems cropping up around every corner. Someone is tailing them, the Shadow Enemy turns up in the unlikeliest of places, and an ancient Daughter sets her cap for Drew, leaving him wondering what could possibly go wrong next.

From The Enemy Within-

Bobby flipped back one of the sheets, revealing an intricately carved headboard. Indigo stepped closer, her body brushing against his in the tight space as she did, and ran a hand over the design.
“It’s beautiful.” Questions popped into her mind one after another, so many she had a hard time choosing between them. Finally, she settled on, “Where did you get it?”
“I made it. Most of the design elements are from the Book of Kells.” He stroked a hand down her hair, then rested it on the small of her back. “The wood’s walnut, from a tree that used to stand near the house. Do you remember?”
“The one lightening struck not long after you were born,” she murmured, and found herself leaning into his warm comfort.
“Dad did a lot of woodworking back then, before he knew about the MS. He salvaged what he could, had it sawed for furniture.” He moved to stand behind her, dropped his hands to her hips, and drew her back until their bodies were pressed firmly together. “I found it when I got out of the Army.”
When he spoke, his breath puffed gently against her ear, sending a shiver along her skin. She eased forward fractionally, away from the delicious press of his body against hers, away from the heat and temptation. His fingers dug into her hips, holding her in place.
Distraction. She need to distract him, or maybe herself, before one of them gave in and did something they might both regret or, worse, enjoy. “It must’ve taken hours to make this.”
“Mmm.” His hands eased around to her stomach as he nuzzled his face into the juncture of her neck and shoulder. “You smell like wildflowers in the spring.”
“Focus, Bobby,” she said, and winced when her voice hitched.
“I am.” He licked her neck above the collar of her shirt, and she shuddered at the feel of his tongue on her skin. “I’m trying to talk you into taking the headboard.”
She breathed out a laugh. “Is that what you’re doing?”
“Say you’ll take it.”
He pressed a kiss to her neck, just above where he’d licked, and blew gently along the moisture left behind. Heat raced through her, pooling between her legs in a rush of warmth and wetness. She melted into him and tilted her head to the side, silently begging him to continue. Goddess above, what he did to her.
He nipped at her earlobe with sharp teeth, eliciting a needy gasp from her. “Say it slowly, though, will you? I kinda like the persuasion part.” 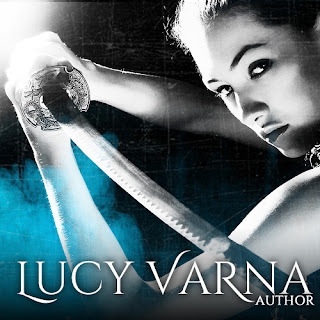 About the Author-
Lucy Varna lives in the Blue Ridge Mountains of northeast Georgia, surrounded by her large, extended family. She's a voracious reader and enjoys nothing more than losing herself between the pages of a good book. Her writing draws extensively on her background in genealogy, history, and archaeology, as well as on her eternal love of Science Fiction, Fantasy, the paranormal, and suspense.