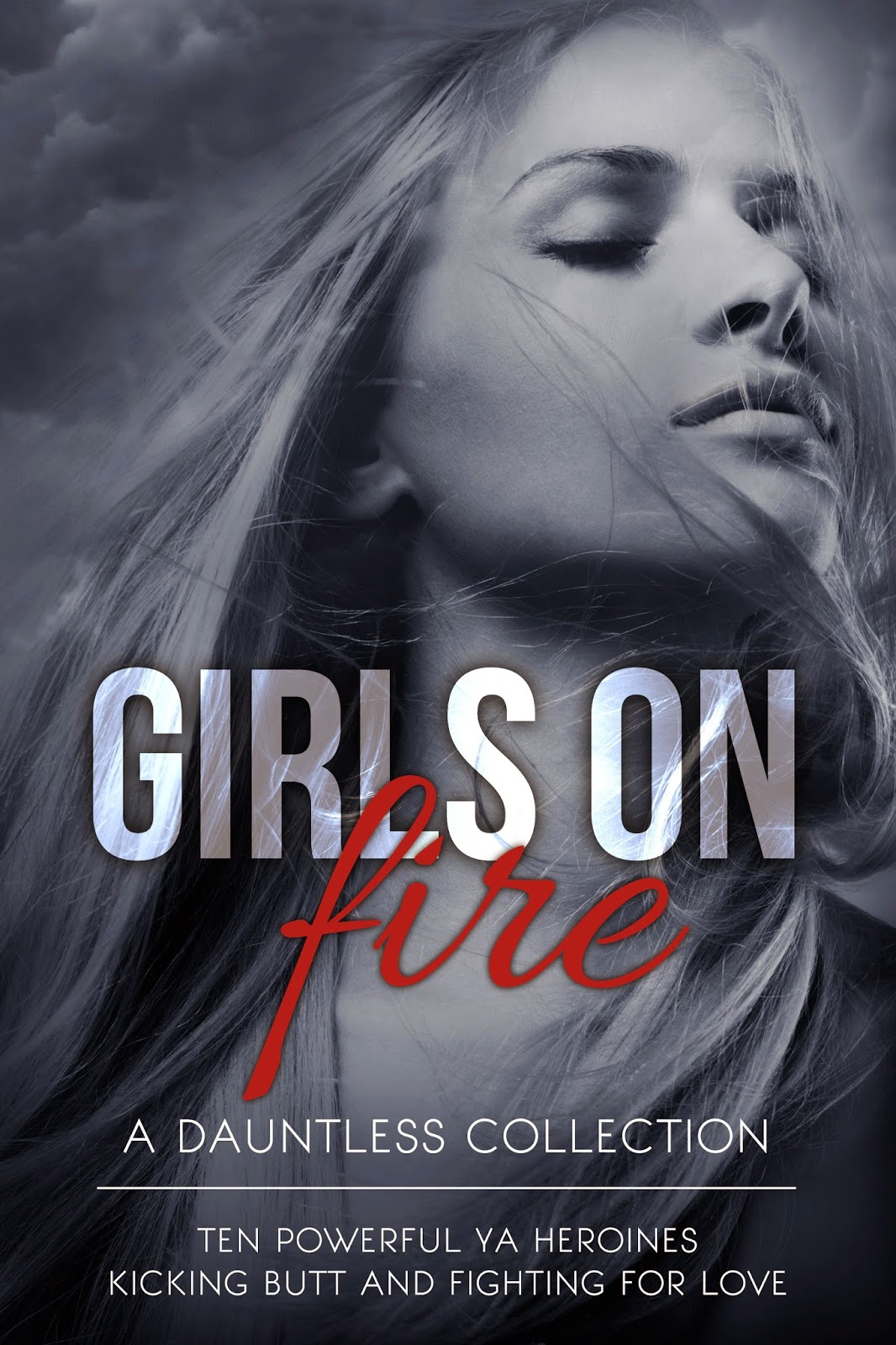 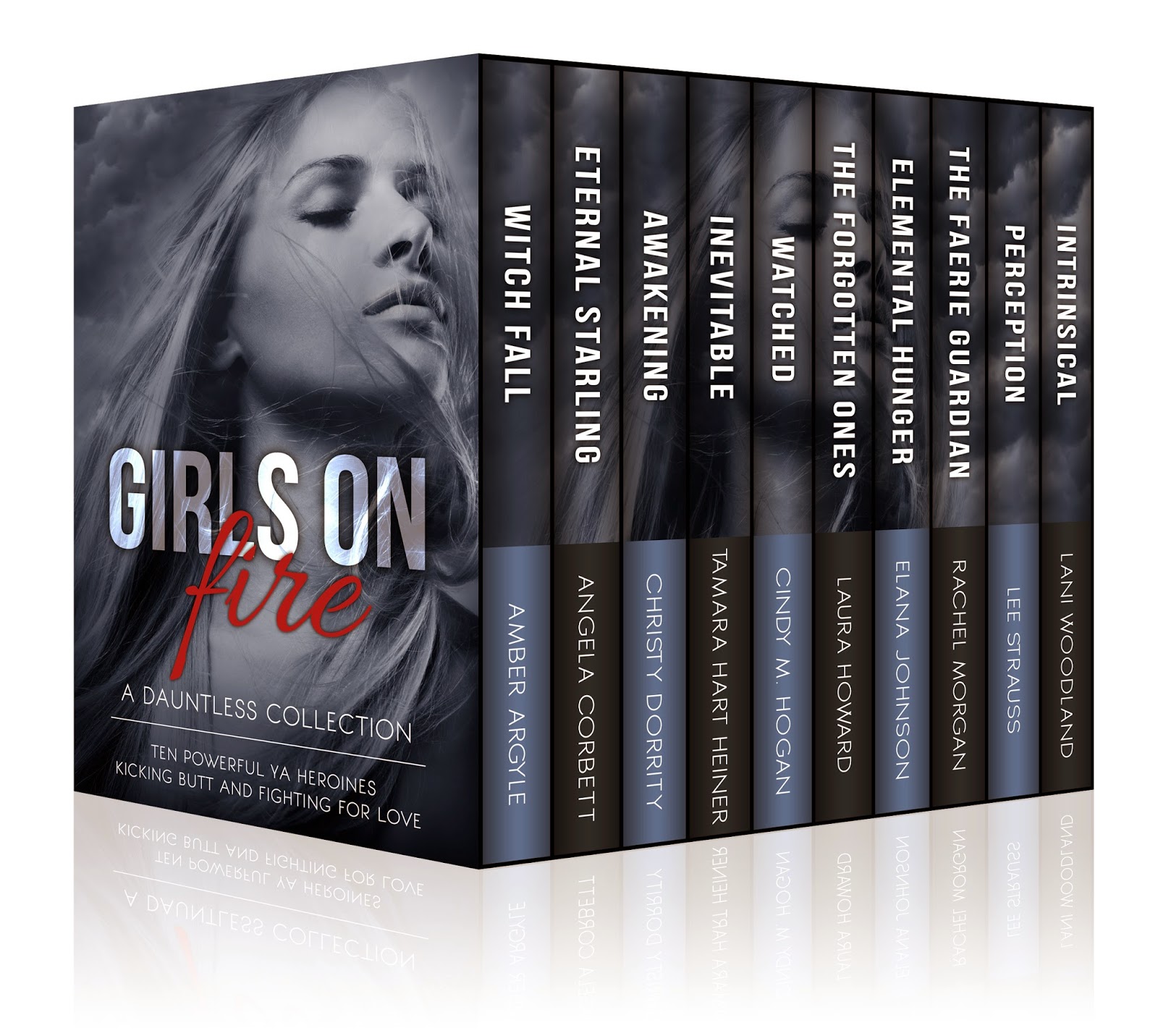 About the GIRLS ON FIRE boxed set:
WITCH FALL – Amber Argyle
High Fantasy
Supreme in their dominion over seasons, storms, and sea, the witches have forgotten the unmatched destructiveness of mankind. And among the weapons men seek are the magical songs of the witches. Born of witches but raised among their enemies, Lilette searches for a way to heal the rift between mankind and the witches. But it may be too late to save either. For if there is one thing Lilette has come to know for certain, it’s that all things fall.

ETERNAL STARLING – Angela Corbett
Paranormal Romance
For centuries, Alex Night and Emil Stone have yearned for Evie Starling. When both men claim to be her soul mate and tell her about an unbelievable past, Evie learns that she’s not the person she thought she was, and her soul is about to become the rope in an eternal tug-of-war.

AWAKENING – Christy Dorrity
Fantasy
When an ancient curse threatens McKayla McCleery's family, she must decide what in her life is real and what is fantasy. Based in Celtic mythology, Awakening is a gripping young adult fantasy that is rife with magic, romance, and mystery.

INEVITABLE – Tamara Hart Heiner
Suspense
Visions of death plague Jayne, who thinks watching her sister die is the worst that could happen to her. But when she witnesses a murder, Jayne realizes that the next death she sees might be her own.

WATCHED – Cindy M. Hogan
Romantic Suspense
Change. She longed for it.
A murder. She will never be the same.

THE FORGOTTEN ONES – Laura Howard
Fantasy

ELEMENTAL HUNGER – Elana Johnson
Futuristic Fantasy
Sixteen-year-old Gabriella Kilpatrick can shoot fire from her hands, which would be great if she didn’t get blamed for a blazing inferno that kills 17 schoolmates. Gabby will have to learn who she can trust, how to control her own power, and most of all, how to lead a Council of Elementals, most of whom have more control over their power than she does. If she can’t, she’ll find herself just like those 17 schoolmates: burned and six feet under.

THE FAERIE GUARDIAN – Rachel Morgan
Fantasy
Kickbutt faerie Violet is about to graduate as the top guardian trainee of her class, but when an assignment goes wrong and the human boy she’s meant to be protecting follows her back into the fae realm, a dangerous plot is set in motion.

PERCEPTION – Lee Strauss
Dystopian/Romance
Eternal Life is to Die For.
A spoiled genetically altered girl needs the help of a jaded “natural” boy to find her missing brother.

INTRINSICAL – Lani Woodland
Paranormal
The gene that allows the women in Yara’s family to see and communicate with spirits seems to have passed her over. Until the night she rescues a local hottie from an attacking ghost. Her act of heroism attracts the attention of the evil spirit, and she finds herself entrenched in the middle of a sixty-year-old curse that haunts the school, threatening her own life as well as that of her friends.

Links:
Goodreads: https://www.goodreads.com/book/show/22370438-girls-on-fire
Buy links coming soon! We’ll send these out when the boxed set is live and you can leave your reviews. Thanks!

About the Authors:
Follow each author’s link to learn more about them and their books.