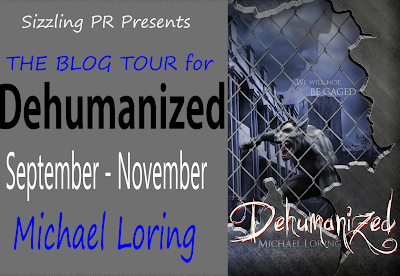 We will not be caged. 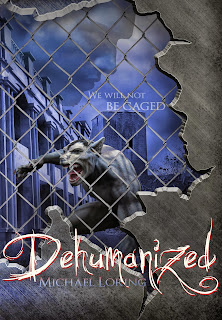 Ryan Zachery lived his life the way all high school teenagers should – carefree. Until he was attacked by an unknown assailer and awoke in the hospital with lycanthropy. Taken by armed guards and dragged away from everything he held dear, Ryan was thrown into a US camp made for those ‘suffering’ from lycanthropy. They caged the beast, but now he will show them that he will never be dehumanized.
Buy Links:
Kindle: http://www.amazon.com/Dehumanized-ebook/dp/B008H75TCC/ref=sr_1_4?ie=UTF8&qid=1373917397&sr=8-4&keywords=Michael+Loring
Paperback: http://www.amazon.com/Dehumanized-Michael-Loring/dp/0985848049/ref=tmm_pap_title_0?ie=UTF8&qid=1373917397&sr=8-4
B&N: http://www.barnesandnoble.com/w/dehumanized-michael-loring/1112229544?ean=9780985848040
Smashwords: http://www.smashwords.com/books/view/178755
Goodreads: http://www.goodreads.com/book/show/15739147-dehumanized

Dehumanized is a fresh take on a werewolf's point of view. Being held captive by humans, being free and surviving camp are the main thoughts of Ryan, our main character.

Michael did a great job on capturing the thoughts and views of a werewolf. Scenes were detailed and the story kept me entertained. This is a great book and I look forward to reading more by this author.

Michael Loring was born in Bristol, Connecticut, but has lived in a variety of places such as Florida and Tennessee. He likes to think of himself as an amateur Lycanthropologist, studying werewolves ever since he was eight years old when he first saw An American Werewolf In London. He spent most of his life switching between home school and public school, always focusing on his passion of writing no matter what. His interest in writing was sparked in the second grade when his teacher encouraged him to write short stories for the class, earning him more than one award at school assemblies for Creative Writing.


He currently resides back in his birthplace of Connecticut with a house full of women who like to drive him up the wall until he finishes his chores. Though they seem to avoid him during the night of the full moon for some unexplainable reason…