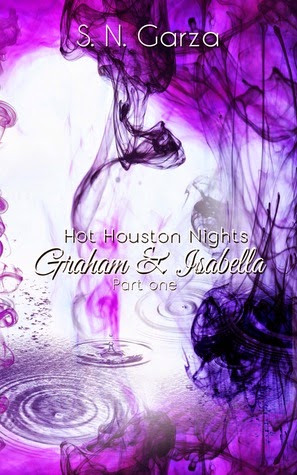 What happens when a one night stand, doesn’t stay just that?

Out for the first time after a long term relationship, Isabella wasn’t expecting much except a good time with the girls. A one night stand wasn’t in the cards, until she met him.

Graham is damaged both physically and mentally by a past that refuses to let him go. When he sees Isabella for the first time, she wasn’t at all what he was expecting.

One night. No regrets. That’s all it was supposed to be. But fate has different plans.

This is a three part serial series of hot sexual encounters and conflicting emotions. Their journey to their happily forever after will be a hard one, but so worth it.

Excerpt:
Men never seemed to fall over me like that. Except Christopher. Definitely a mistake getting with that guy. I know that now, but it was a bigger mistake thinking I could come here and act normal and have some random, hot guy wanna dance with me. Freaking pathetic.

I was almost off the dance floor when firm hands hooked into my two side belt loops from behind and brought me against a firm body.

Holy cow. The guy behind me was nothing but broad muscle and strong hands. He had two fingers hooked in my loops and the other three long fingers I felt on my pubic bone, and they pressed me against his thighs. His body was hard behind me and it was like my whole body lit up.

He must be taller than me. Well, everyone was, but the average guy was only five feet ten inches. Maybe six foot, but when they were behind me, I felt their groin. Not this man. I felt the thick steel rod almost at the middle of my back.

“Damn, sweetness. I hadn’t realized you were so tiny compared to me.”

His lips skirted passed my earlobe, nipping the edge between his teeth.

Fuck. Me. That little bite sent a sexual bolt of lightning straight down my body until it hit my core. I felt my pussy tighten with arousal. Sweet mother, that voice could rattle cages.

“Hmmm...I'll have to remember that, sweetness. For now, let's dance."

Crap. I had no rhythm. At all. Stella was the one who made me look halfway decent.

"Uh. No, but thanks anyway. I should just go back to the bar and have some drinks."

"Please don't. And don't be afraid when I say this, but I was watching you up here and noticed you weren't comfortable. I can make you feel real comfortable, sweetness. Just one dance."

The song that was playing was fast and I had no idea what to do.

"This songs almost over. Don’t worry.”

The song finished shortly after he said that and 'Skin’ by Rihanna came on.

Double crap. I couldn't dance to this song with a stranger. It was a sex song.

"Is that a blush? Fucking beautiful."

His body began to move against mine, rocking my body and he took a hand and swept the stray hair that had come undone to the side. He dipped and his lips met the groove of my shoulder and I could smell his heady scent fill my nostrils. It was intoxicating. Sensual with a hint of musk and man.

His hands skimmed down and feeling his work-rough hands touch the bare flesh of my shoulder sent tingles throughout my body. Making me feel hyper alert. Gooseflesh sprinkled across my skin and his hands outlined the sides of my breasts which were starting to feel heavy. His hands slowly went down far enough to caress my thighs.

Holy mother, my pussy was aching from his touch. His thumbs hooked between my jeans and silk panties.

Teasing me with unhurried precision. His fingers massaging circles into the pockets…so close to the hood of my already damp vagina.

My head fell back and his breath was hot against my neck.

A small moan escaped my lips and his fingers got bold and traced the zipper seam down and gently circled my clit. It was light and was gone before I could do anything except let out a small cry.

The small orgasm raced through me from the contact and it was enough to make my body mold and press into him. Hits fingers contacted on mine and he groaned against my neck

I couldn’t help but nod yes. And the dance became more intimate as he moved my body with his. He tucked his body down just enough for me to feel the hard ridge life his shaft against the cleft of my rear.

I really wanted to see his face now. The first man to make me come just by mere proximity.

Author Bio:
S. N. Garza is from Southeast Houston, Texas, with her husband and two small children. She is a full time Chilihead employee at Chili's Bar & Grill. Author of steamy, sexy, sinfully beautiful stories about strong alpha men and the women who fall for them.
When she's not taking care of her family, working her tail off at her all day job, you can find her writing well into the night, and reading another steamy romance novel, attaining another fictional boyfriend.
Remember
Where the men are strong, the women, stronger.