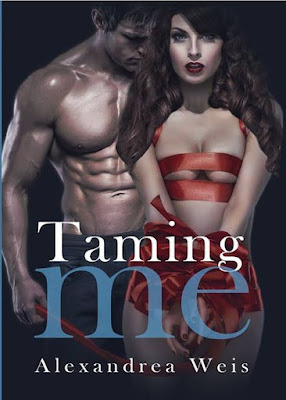 Blurb: Lexie Palmer is a writer in search of the perfect story.


When a case of mistaken identity introduces her to the charismatic dominant, Garrett Hughes, she discovers her salvation. In hopes of penning an accurate portrayal of the BDSM lifestyle, Garrett agrees to educate Lexie.
She eagerly places herself in Garret’s capable hands, but what starts out as just business with the sexy Mr. Hughes takes a turn toward the unexpected.
Soon, Lexie becomes immersed in his world, and finds Garret taking control of her life. Her experiences with Garrett may be providing wonderful material for her book, but how far is she willing to go to for her story?
Lexie Palmer is about to get a lesson in submission that she will never forget.

I loved this book! It was a nice surprise to see characters from her other books make an appearance in Taming Me.
Lexie is a writer who is stuck in a rut. With sales stalling out, she needs to find something more to write about. Getting the idea to write about BDSM, she realizes she only knows what has been written about it through other books. Wanting to be more than those other books, she takes it upon herself to research this taboo lifestyle. With that, she meets Garrett. With his deadly good looks, she feels things she shouldn't with him and his lifestyle.
This book was fast paced and full of excitement on all levels. Lexie is a character that is strong and a go-getter. She is willing to do things for her story, perhaps even falling in love with a Dom?

From New Orleans, Alexandrea Weis was raised in the motion picture industry and began writing stories at the age of eight. In college she studied nursing and went on to teach at a local university. After several years in the medical field, she decided to pick up the pen once again and began her first novel, To My Senses. Since that time she has published many novels. Infusing the rich tapestry of her hometown into her award-winning books, she believes that creating vivid characters makes a story memorable.
Alexandrea Weis is also a certified/permitted wildlife rehabber with the La. Wildlife and Fisheries. When she is not writing, she rescues orphaned and injured wildlife. She is married; they live in New Orleans.
Author Links: Facebook: https://www.facebook.com/authoralexandreaweis/ Webpage: http://www.alexandreaweis.com/ Twitter: https://twitter.com/alexandreaweis Amazon: http://amzn.to/21jfcqO Goodreads: https://www.goodreads.com/author/show/1211671.Alexandrea_Weis
Buy Links: Amazon: http://amzn.to/29uJ0jS Amazon UK: https://www.amazon.co.uk/Taming-Me-Cover-Book-ebook/dp/B00RWP3YQS?ie=UTF8&ref_=asap_bc Amaozn CA: https://www.amazon.ca/Taming-Me-Cover-Book-ebook/dp/B00RWP3YQS/ref=tmm_kin_swatch_0?_encoding=UTF8&qid=1464095866&sr=1-1-catcorr Nook: http://www.barnesandnoble.com/w/that-night-with-you-alexandrea-weis/1120676428?ean=2940150753396 iBooks: https://itunes.apple.com/us/book/taming-me/id960816630?mt=11 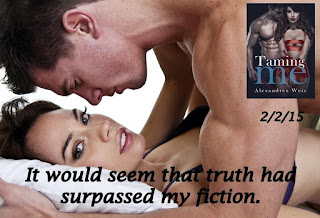